Ottawa to spend $400 million on transportation in Nunavut, NWT, Yukon 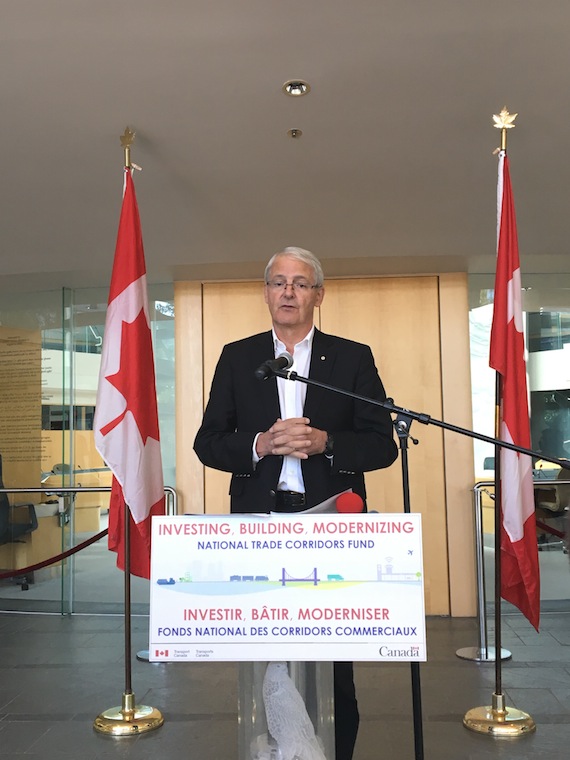 Speaking in the Northwest Territories’ legislature Aug. 18, Transport Minister Marc Garneau talks more about the $400 million that will be split among the three territories for transportation infrastructure projects. (PHOTO COURTESY OF THE GOV. OF CANADA)

Ottawa has $400 million to hand out to transportation projects across Nunavut, the Northwest Territories and Yukon, the federal transportation minister Marc Garneau, announced Aug. 28 in Yellowknife.

Speaking at a news conference in the NWT Legislature, Garneau offered up more information about the territories’ share of the $2 billion “national trade corridors program,” first announced in July.

“The Government is aware of the pressing transportation challenges in the Territories, and we are working to address them here in the North, [and that] the most basic transportation infrastructure is still limited,” said Garneau, fresh from Cambridge Bay, where he announced $175-million for marine safety measures.

“It difficult, time-consuming, and expensive to move passengers and goods in and out of northern communities,” Garneau said in Yellowknife, mentioning that “in Cambridge Bay, I also saw first-hand the challenges a remote settlement can face.”

But $400 million, over 11 years and spread between the three territories, won’t be enough to bankroll such large transportation projects as the $500-million Grays Bay project or an all-weather road north from Yellowknife or the Nunavut portion of the road to Churchill, Man.

Garneau said the money from the trade corridors fund will go to projects that increase safety and economic or social development.

These are likely to be smaller-scale projects, which include types of infrastructure such as:

• improvements to runways and weather information systems at northern airports;

• breakwaters and docking facilities for ships; and,

• all-season roads and bridges to reduce reliance on ice roads.

Territorial governments and Indigenous groups, as well as private sector organizations have until Sept. 5 to send Transport Canada their expression of interest submissions.