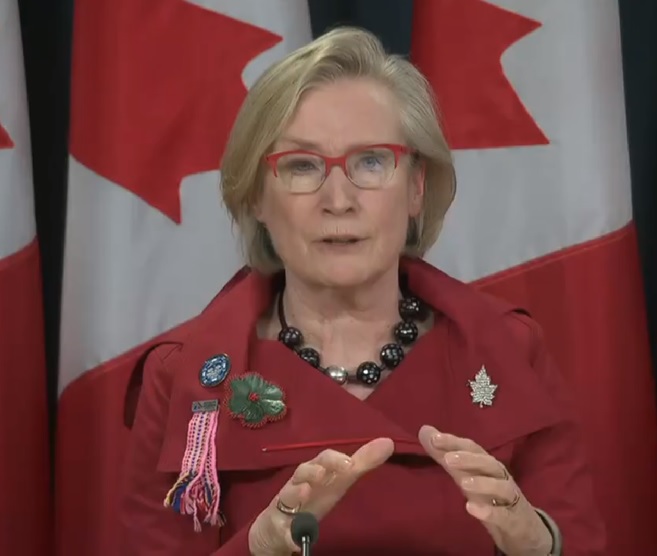 Carolyn Bennett, Canada’s minister of Crown-Indigenous relations, said June 5 that Ottawa will give commissioners until April 30, 2019 to submit their final report and an additional two months to wrap up the inquiry’s operations. (IMAGE COURTESY OF CPAC)

The federal government has agreed to extend the inquiry looking at the root causes of violence against Indigenous women for an additional six months.

But commissioners leading the National Inquiry into Missing and Murdered Indigenous Women and Girls say that’s not enough time to complete their work.

Carolyn Bennett, minister of Crown-Indigenous relations and northern affairs, said on Tuesday, June 5 that Ottawa will give commissioners until April 30, 2019 to submit their final report and an additional two months to wrap up the inquiry’s operations.

The commission was given $54 million to run a two-year inquiry initially set to end in November 2018. Commissioners formally requested another two-year extension this past March.

“We feel like we’ve given an appropriate extension and the time needed to get their work done,” Bennett said at a news conference. “We have confidence in the commission.”

The new timeline would deliver the commission’s final report to the Trudeau government just ahead of the next federal election, set for October 2019.

Bennett also announced a series of different funding envelopes directed to different aspects of the inquiry’s work, through most of it will go to federal departments:

• $21.3 million over three years for health supports provided by the commission.

• $5.42 million in 2019-2020 towards two Department of Justice initiatives: family information liaison units, and funding for community-based organizations to support families beyond the life of the inquiry.

• $10 million to establish a commemoration fund to honour the legacies of missing and murdered women, coordinated through Status of Women Canada.

• $9.6 million over five years to the RCMP’s new National Investigative Standards and Practices Unit, which provides oversight to major investigations.

The same police unit can take referrals from the national inquiry on cases which families feel were mishandled, Bennett said.

The funding addresses different recommendations made in the commission’s interim report released last November, one year into its original mandate.

But six months of time and some new funding won’t cut it, said commissioners, who expressed “profound disappointment” in the government’s response.

“In seeking a two-year extension, we were striking a balance between the urgency of the issues and the need to do this work thoroughly,” said the inquiry’s chief commissioner, Marion Buller, in a June 5 statement.

“Now we believe political expediency has been placed before the safety of Indigenous women, girls and 2SLGBTQ people,” she said.

“We are disappointed that the Government of Canada does not believe this is worth another 24 months.”

Since the inquiry began its work, commissioners have heard from more than 1,273 witnesses at 15 community hearings and other statement gathering events across the country, including two events in Nunavut.

With an extension until December 2020, the inquiry would have focused on visiting more of Canada’s Indigenous regions and communities, as well as doing more in-depth work with women who are incarcerated, homeless and trafficked.

But commissioners say that, given the shorter extension, their priority would be gathering statements from some 500 families and survivors who have already registered to tell their stories.