“A place where our youth come together to learn, grow and dream” 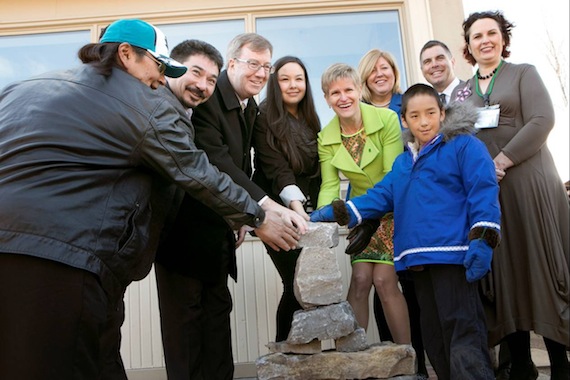 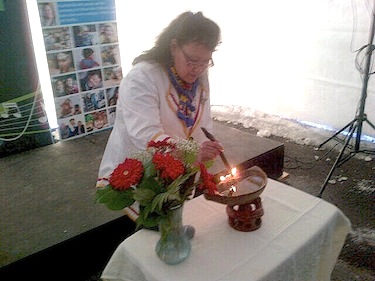 Reepa Evic-Carleton lights the qulliq April 3 at the official opening of the new building for the Ottawa Inuit Children’s Centre. (PHOTO COURTESY OF M. OKALIK)

For Inuit in Ottawa, who use the services of the Ottawa Inuit Children’s Centre, there’s more to love: a new building which celebrated its grand opening on April 3.

“It was an amazing event. It was really an event about the community,” said Karen Baker-Anderson, executive director of the Ottawa Inuit Children’s Centre.

Bought with the help of a $350,000 donation from Toronto-Dominion Bank Group, the new building will house programs for Inuit youth in Ottawa.

The new building is located at 76 Queen Mary Drive, just two blocks from the centre’s two other buildings on MacArthur Ave. in Vanier.

At the opening, Maatalii Okalik, president of the Ottawa Inuit Children’s Centre, talked about how the new building will be more than just a structure.

“It will be a place where our youth come together to learn, grow and dream,” she said.

The official opening of the new space was a cross-cultural affair: Jim Watson, mayor of Ottawa, artist Tim Pitsiulak from Cape Dorset, and Terry Audla, president of Inuit Tapiriit Kanatami, joined representatives from TD Bank Group and the children’s centre.

Abigail Carleton and Aneeka Anderson, two Inuit youth who live in Ottawa, wrote and performed a song of “gratitude” about the centre, “where they can come and celebrate as youth in our community.”

A qulliq-lighting ceremony, throat-singing and traditional games took place in a traditional tent where everyone could sample fresh bannock.

The end of the ceremony was marked by the placing of the last stone on an inuksuk in front of the new building.

For some of those present, the event provided a “quick glimpse into the Inuit culture,” Baker-Anderson said.

Even in the new building, the goal of the centre remains the same, that is, to provide cultural, educational, recreational and social support services to children, youth and families of Ottawa’s growing Inuit community, Baker-Anderson said.

The Ottawa Inuit Children’s Centre started seven years ago when a group of parents decided they wanted their children to grow up knowing who they were and the history of their Inuit culture, she said.

In 2012, the centre served nearly 500 children, parents, youth and community member through its 10 programs, which include the Tumiralaat child care centre and kindergarten, Uqausivut culture and language program, Tukimut after-school program, family literacy program and Bridging the Gap program.

The centre now plans to see what else it can offer to youth over the age of 13.

The demand is there because Ottawa is home to about 2,000 Inuit, Baker-Anderson said, the largest population of Inuit outside the North.