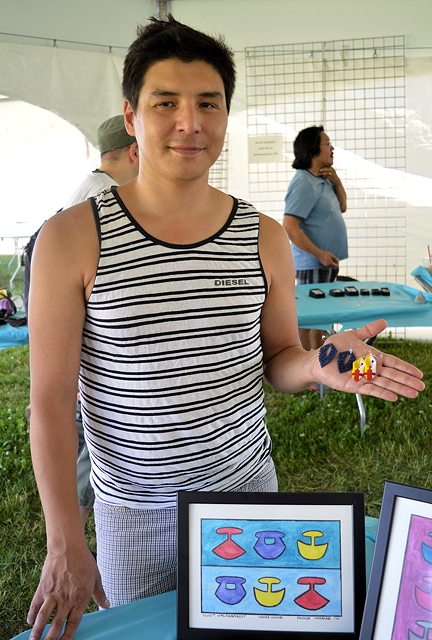 Dennis Nakoolak, 35, paints with watercolours and creates bead-work earrings as a hobby in his spare time. Originally from Iqaluit, he has been living in Ottawa for a few years now and works at the Akausivik Inuit health centre as a case manager. 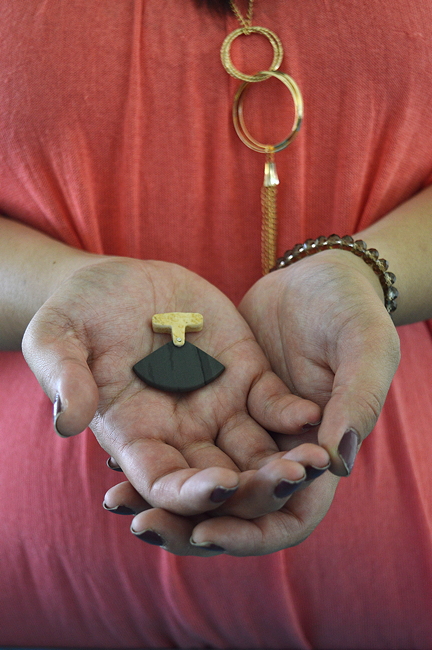 Jennifer Kudluk displays an ulu she made — a symbol of female empowerment and tradition, she says — at the summer solstice festival. 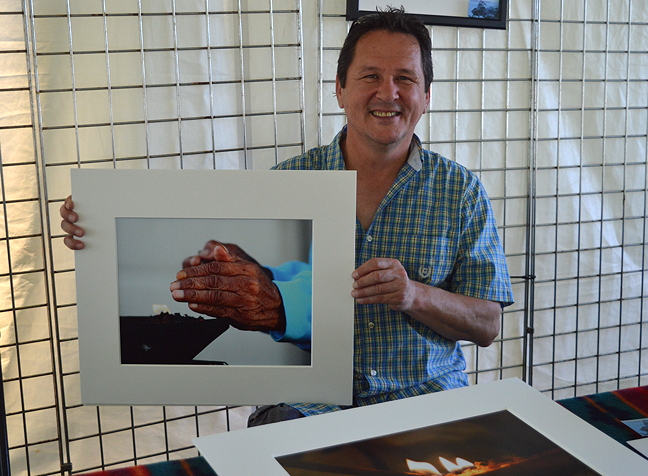 Barry Pottle holds up a photo from his “Food Security Series” at the Summer Solstice Aboriginal Festival’s Inuit art pavillion. The annual Aboriginal arts festival was held June 17 to June 20 in Ottawa and featured the largest Inuit presence ever. (PHOTOS BY COURTNEY EDGAR)

Inspired by Cape Dorset’s Jimmy Manning, Pottle chose photography because he says it remains an art form that few Inuit artists have explored, at least in comparison with stone carving, beaded crafts and painting.

Under the Inuit Art Pavilion tent at the Summer Solstice festival June 17 to June 20 — an Aboriginal arts celebration, timed with longest day of the year and National Aboriginal Day, which unfolds in the nation’s capital — artists, including Pottle, passed on traditions and shared their healing journeys through craft and art.

Seven tables were set up with seven artists and their works, where members of the public were also invited to try their hand at Inuit crafts. There was even a special area at the centre of the tent for the curious to carve their first stones into polar bears.

Pottle, originally from Nunatsiavut, but now living in Ottawa, began his photography career in photojournalism.

Pottle, who has been taking photos for about 10 years and is largely self-taught, has seen his work featured in magazines such as Inuktitut and Inuit Art Quarterly.

More recently, he’s moved beyond that to pursue more creative photographic projects, like the “Foodland Security Series,” which focused on the difficulty urban Inuit have accessing country food in the city, Pottle has explored contemporary issues that face urban Inuit.

His exhibit “Awareness Series,” recently featured at Toronto’s Feheley’s Fine Arts in Toronto, includes 19 coloured photographs of the Eskimo Identification Tag system and the people who wore these between 1944 and the end of the tag system in 1969.

One of his favourite photographs — a completely frosted-over snowmobile taken in the middle of vast whiteness in the Northwest Territories community of Sachs Harbour, is called “Idle No More.”

Henry Kudluk from Coral Harbour, whose work has been displayed in galleries in Montreal, has been carving for nearly 20 years.

While he said he loves to shape animals, his favourite subject remains Sedna, the Arctic sea goddess.

And, using mainly white granite or whatever stone that he can find locally for his works, he’ll spend 20 to 30 hours on each carving.

The carving he worked on at the festival this past weekend was nearing completion, he said, but, “there is still some work to be done.”

Kudluk recalled how he had many mentors while growing up, chief among them his grandfather, who was also a carver — ”he made mini-harpoons and I used to watch him carve,” said Kudluk.

Like many traditions, art runs in Kudluk’s family — his daughters were also at the Inuit art pavilion with their own work.

Christine Kudluk, 30, who teaches beading at the Ottawa Inuit Children’s Centre, was selling her shoulder necklaces with open lacework beading for the first time at this year’s festival.

Jennifer Kudluk, 25, who has made jewellery out of stones, antlers and metal for almost two years, also used to watched her father carve while she was growing up. That’s when she decided she wanted to make beads out of stone. Making ulus is her favourite subject matter.

“Traditionally, it is a women’s knife and it’s really versatile,” said Jennifer. “I love the shape of it and making it so small just makes it so neat.”

To her, it is a symbol of female empowerment and tradition.

Each of the seven artists under the tent agreed with that — they create art, in part, to continue a long-standing Inuit tradition.