“We don’t know who is alive and who passed on. We have heard a lot of sad stories” 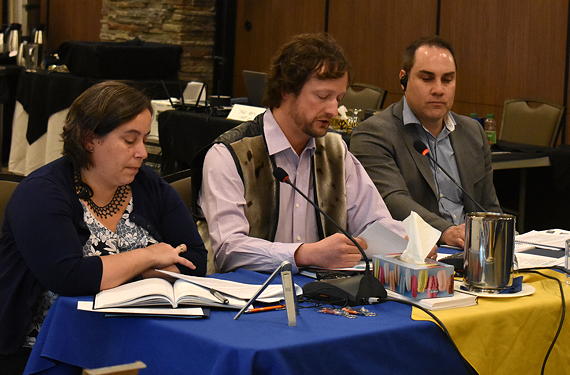 David Rochette, the regional director of Crown-Indigenous Relations and Northern Affairs, says the federal government will apologize sometime this fall for the historical abuses that Inuit experienced at tuberculosis hospitals between the 1950s and 1960s. Rochette says this apology will start an initiative to combat tuberculosis called Nanilavut, which is planned to support families of victims and survivors, as well as raise public health awareness in the North. Rochette made these remarks during the last day of Nunavut Tunngavik Inc.’s annual general meeting in Iqaluit. (PHOTO BY COURTNEY EDGAR)

The federal government is expected to issue an official apology for the historical abuses that Inuit experienced at tuberculosis hospitals during the 1950s and 1960s.

That’s according to David Rochette, regional director of Crown-Indigenous Relations and Northern Affairs, who spoke at Nunavut Tunngavik Inc.’s annual general meeting in Iqaluit on Oct. 25.

“A formal apology will be launching the initiative [Nanilavut] this fall, but the date and time is yet to be confirmed,” Rochette said.

Rochette said his department, known as CIRNAC, will be working with NTI on a three-pronged approach to combat tuberculosis, in a project called Nanilavut.

A formal acknowledgement will kick-start the initiative, which is planned to include a database and family supports, as well as public education and health awareness.

The Nanilavut initiative is one item being moved forward by the Inuit-Crown Partnership Committee.

According to Rochette’s presentation, the initiative will enable Inuit to access records regarding their family members lost to the tuberculosis epidemic of the past.

“The goal is to help bring closure and begin the healing process for Inuit families and communities,” Rochette said.

In March, on the day before World Tuberculosis Day, Indigenous Services Minister Jane Philpott promised that the federal government would eliminate TB from Inuit Nunangat by 2030.

In January, the federal government pledged to set a timeline for its plans to eradicate TB in the North, where Inuit rates of infection are 270 times higher than among Canada’s non-Indigenous population.

Another TB screening clinic was hosted in Qikiqtarjuaq earlier this year.

“We were treated like dogs,” said Alice Ipkornerk, the women’s representative for the Kivalliq region at NTI’s annual general meeting last Wednesday.

She broke into tears while speaking about her own experiences at TB hospitals in her childhood.

“This was a very hurtful and bad experience,” said Ipkornerk. “We were forced to eat, pushing the food down to our throats, even though we were vomiting … and we would be physically hit.”

The NTI members discussed whether it is possible that graves for some individuals with TB were not found because their bodies were cremated. Some NTI members said they had heard accounts from witnesses about cremation at TB hospitals.

NTI has a three-person team that is working to locate the graves of people who died of TB whose remains have not been returned.

“We don’t know who is alive and who passed on. We have heard a lot of sad stories,” said Arreak-Kullualik.

“Those who survived and came back were quite a high number too.”