Ottawa puts out feelers for Nunavut oil and gas exploration 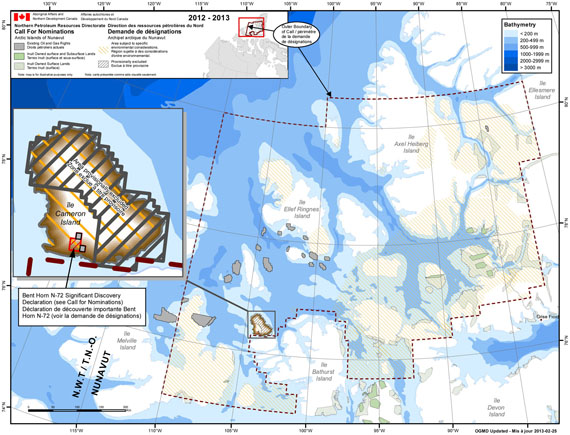 This map shows the area covered by AAND’s recent call for nominations on Nunavut Arctic Islands oil and gas fields. This year, the Bent Horn oil field has been added to the area. Since 2002-03, when Ottawa began issuing such calls for nomination, the oil and gas industry have shown little interest in Nunavut.

In a process called a “call for nominations,” the Aboriginal Affairs and Northern Development department is asking oil and gas exploration firms to tell them which blocks of land in the Arctic Islands they would like to see open for bidding in the future.

But that doesn’t mean oil and gas exploration will occur there any time soon. Since 2003-03, when such calls for nomination began, industry has shown little interest in Nunavut’s Arctic Islands.

And natural gas prices, due to the growth of shale gas production, are now deemed too low to justify costly exploration work in the High Arctic.

The Sverdrup Basin in the High Arctic is believed to contain at least 14 trillion cubic feet of natural gas, a figure based on exploration work done in the 1970s.

Oil companies have also given Nunavut a pass, even though the Arctic Islands are estimated to hold about 300 million barrels of oil.

This year, AAND is adding lands around Bent Horn to its call for nominations.

Located on Cameron Island, Bent Horn is the site of Nunavut’s only commercial oil field, which operated between 1985 and 1996, producing about 2.8 million barrels as part of a small demonstration project.

Those Bent Horn lands had previously been excluded from federal calls for nomination.

The lands covered by the call for nominations are all Crown lands on islands located within the Nunavut settlement area, stretching across a huge area from Axel Heiberg Island to the east side of Melville Island.

The document reminds firms that the lands are subject to the requirements of the Nunavut land claims agreement.