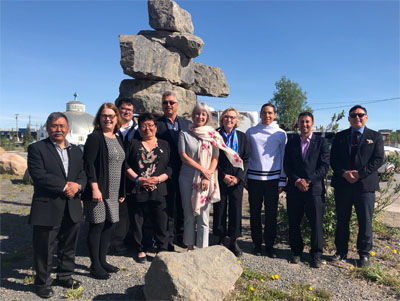 Federal ministers are pictured with Inuit leaders in Inuvik, N.W.T. on June 27, where they met as part of the Inuit–Crown Partnership Committee. (PHOTO COURTESY OF J. PHILPOTT)

The federal government has pledged to develop a new policy to ensure Inuit children have equitable access to health care and other public services, regardless of where they live and where they go to receive care.

The new initiative is meant to be an equivalent to another policy in place for First Nations children.

The policy and related funding are intended to resolve jurisdictional disputes between provincial/territorial and federal governments over the cost of health care services, when children have to travel away from home to receive them.

“In the past, there was a lack of understanding around if Inuit were eligible under Jordan’s Principle,” said Natan Obed, the president of Inuit Tapiriit Kanatami.

“Only in the last year or so has the federal government made it clear that we weren’t.”

ITK, as a member of the Inuit-Crown Partnership Committee, has been lobbying the government to be included under the same principle.

The committee met with federal ministers this past week in Inuvik, Northwest Territories, where Indigenous Services Minister Jane Philpott committed to the creation of what’s being called the Inuit-Specific Child-First Initiative.

“The federal government has now agreed to work with us to create something [that] will be an Inuit-specific response to that need,” Obed said.

The vast majority of Inuit Nunangat residents are required to travel out of their community or region at some point to receive certain services, most often health-related care.

Every Inuit region has its own specific considerations when it comes to the provision of health care, but, in some cases, jurisdictions can’t guarantee certain care because of service agreements in place.

It’s not just access to complex care that can be challenging across the North, Obed said, but care for very specific conditions, like autism.

“The protocol around who receives services or where might bump an Inuk child to the back of the line,” he said. “This initiative will close that loophole.”

Jordan’s Principle was named in memory of Jordan River Anderson, a young boy from Norway House Cree Nation in Manitoba who lived with a rare muscular disorder.

He spent more than two years in hospital, where he died at age 5, while Canada and Manitoba fought over who would cover the costs of his at-home care.