“This is the opportunity to bring the North to the South” 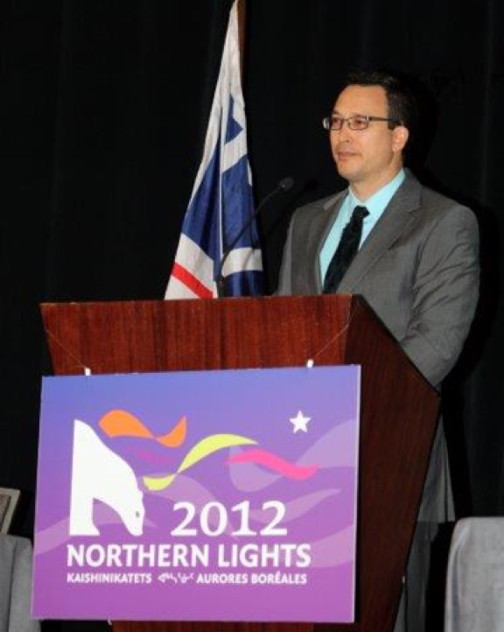 Victor Tootoo speaks at the 2012 Northern Lights Conference and Trade Show in Ottawa. (PHOTO COURTESY OF THE BRCC)

With a stellar speaker’s line-up including Nunavut’s new premier and the Nunavut member of Parliament, and participation from mining, energy and communications companies, Ottawa’s semi-annual Northern Lights conference and trade show promises a robust showcase of northern opportunities.

Event co-planner and the Baffin Regional Chamber of Commerce’s executive director, Chris West, said the event, which will unfold over four days in Ottawa from Jan. 29 to Feb. 1, 2014, has seen participation grow by about 50 per cent with each edition of the event.

“It’s for northern businesses to show the South what they have to offer. In return, you hope to get business opportunities and attract companies and corporations to become partners, to help northerners be more successful,” West said.

“The South has a big interest in the Arctic. This is the opportunity to bring the North to the South.”

Held every second year in Ottawa — organizers tried it once in Montreal but it failed to attract the same number of federal politicians and senior public servants — the event includes 204 trade show booths, conference sessions, company and sector workshops and a very popular arts and culture pavilion.

The event, a joint venture between BRCC and the Labrador North Chamber of Commerce, is designed to showcase businesses and culture from all three of Canada’s eastern Arctic regions.

“We focus on the arts quite a bit,” West said. “Even though we call it an arts pavilion, it’s all about culture. You can watch artists carving, people drum dancing or throat singing. People from the South don’t often get to see that live.”

Organizers are hoping to bring 120 visual and performing artists to the show from Nunavut, Nunavik, Nunatsiavut and possibly Greenland. Iqaluit’s Jerry Cans will perform at the Saturday night closing gala.

The 2012 show and conference attracted about 1,000 people and, if previous growth is any indicator, organizers expect that to climb to between 1,600 and 2,000 this year.

West did not say how much the show costs or exactly how it’s paid for, but he did say it’s funded through a combination of trade show ticket sales ($15), conference registration ($645 plus the cost of keynote breakfasts, lunches and the closing gala), booth rentals ($1,295 each) and grants from organizations and various levels of government.

The opening keynote will be delivered by Nunavut MP Leona Aglukkaq, Canada’s environment minister and minister responsible for CanNor.

Location, at the downtown Ottawa Convention Centre, is a huge draw for northern participants since that venue is located right across from the canal and a stone’s throw from Parliament Hill, the Rideau Center and the Byward Market.

Participants who decide to stay in Ottawa after the conference can enjoy Ottawa’s annual winter festival, Winterlude, which begins that same weekend.