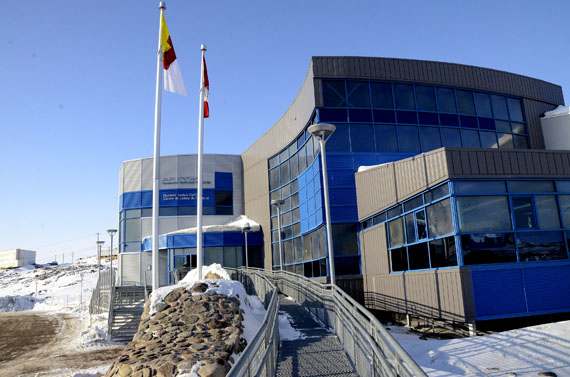 Starting March 15, 2015, the Nunavut Court of Justice will host what it is likely to be the longest trial in Nunavut’s history — to resolve Nunavut Tunngavik’s 2006 lawsuit against the federal government. (FILE PHOTO)

A $14.8 million damages award that the Nunavut court ordered the federal government to pay in June 2012 over Ottawa’s failure to create an environmental and social monitoring plan is now set aside, the Nunavut Court of Appeal said in a complex ruling issued April 25.

The three-member appeal court issued the ruling — with two judges in favour and one opposed — after hearing Ottawa’s appeal of Justice Earl Johnson’s 2012 summary judgment on the general monitoring plan allegation.

In that 2012 decision, which dealt only with the narrow issue of the general monitoring plan set out in Article 12.7.6 of the Nunavut land claims agreement, Johnson calculated that Ottawa should pay $14.8 million in compensation.

It’s called a “summary judgment” because it was issued after an expedited process that didn’t require a full-blown trial.

All the other allegations in Nunavut Tunngavik Inc.’s billion-dollar lawsuit against the federal government, launched in December 2006, are expected to be resolved following an enormous 20-week trial scheduled to start March 15, 2015.

At the appeal hearing, federal government lawyers admitted that Ottawa had breached Article 12.7.6. by not creating a general monitoring plan until 2010.

But they did argue, before a panel of three appeal court judges, that Johnson had erred in the way he calculated the damage award.

The “general monitoring plan” is a provision that requires government, and the Nunavut Planning Commission, to collect data from government and industry on the state of Nunavut’s ecosystem and socio-economic health and put the data into reports.

Justice Frans Slatter, one of two judges who ruled for the majority, agreed with federal lawyers that Johnson made mistakes in the way he calculated the damage award.

“On this record in support of summary judgment, the respondent has not demonstrated a common law, equitable, fiduciary, or aboriginal right to “ecosystemic and socio-economic monitoring,” nor a corresponding duty on the Crown to monitor,” Justice Frans Slatter said in the majority decision.

“The duty to monitor found in Article 12.7.6 is entirely a creation of the Land Claims Agreement,” Slatter wrote.

That means, Slatter said, that it’s not covered by a “parallel” fiduciary duty.

Slatter said Inuit agreed to the extinguishment of their aboriginal title when they ratified the land claims agreement and that they can’t make new claims now.

“It follows that the respondent cannot build any fiduciary duty based on a platform of the now surrendered aboriginal land claim,” he said.

For that reason, and others, Slatter said the numerous complexities of the damage award issue and the question of Ottawa’s fiduciary duties should not have been dealt with in a summary process.

He did say that NTI is entitled to a declaration that Ottawa was in breach of Article 12.7.6.

But federal lawyers had already conceded that point at the appeal hearing.

The damage award issue will now go back to Johnson and will likely be decided after the 2015 trial.

“The timing and format of the procedure for the calculation of the quantum of damages is remitted to the case management judge,” Slatter said.

But a third appeal court judge, Justice Constance Hunt, disagreed and said Ottawa’s appeal should have been dismissed.

In a press release April 25, NTI still claimed victory, saying the appeal court affirmed that Ottawa was in breach of Article 12.7.6 — even though Ottawa admitted the breach last summer.

Next year’s trial of the main lawsuit is expected to be the longest and most complex proceeding every held before the Nunavut court.