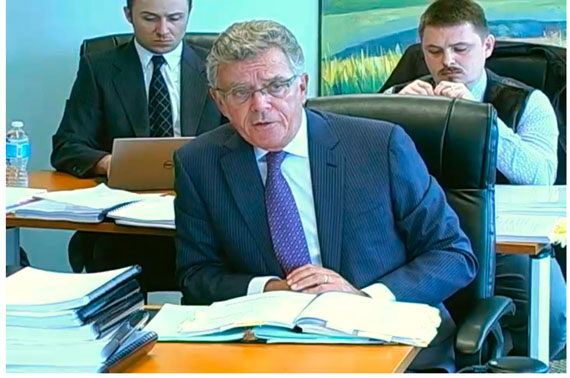 Following a hearing last week, an arbitration panel will decide by June 20 whether the Baffinland Iron Mines Corp. must cough up between $8 and $9 million in advance royalty payments that the Qikiqtani Inuit Association is demanding from them.

That includes $2.5 million worth of advance payments for the last two financial quarters of 2015. Baffinland actually agrees they owe that money, but hasn’t yet paid it.

Baffinland promised to make advance royalty payments to QIA within the Inuit Impact and Benefit Agreement the two sides signed on Sept. 6, 2013.

But the QIA alleges Baffinland stopped making those payments much too early—in April 2015.

And that unresolved disagreement has triggered the IIBA’s dispute-resolution mechanism: a three-person arbitration panel that will issue a decision that will be binding on both sides.

The panel heard that the IIBA requires that after Baffinland gave the QIA an initial $20 million in advance payments, Baffinland was to have continued the payments at a rate of $1.25 million every three months until the achievement of either “commercial production” or an advance payment cap of $75 million.

After that point, and only after that point, the company would instead make royalty payments each quarter worth 1.9 per cent of net sales revenue. The advance payments would be then clawed back from the royalties, under an agreed schedule.

The heart of the dispute centres on the meaning of the term “commercial production.”

The QIA insists that “commercial production” was intended to mean 60 per cent of 18 million tonnes per year, the figure given in Baffinland’s original project description and in the project certificate they received from the Nunavut Impact Review Board.

And the QIA’s lawyers also told the panel Baffinland always knew the QIA wanted advance payments of $20 million up front plus up to $55 million in advances for up to 11 years.

But the curtailment of the advance payments in April 2015 occurred after Baffinland started operating under the “early revenue phase” of the Mary River project, under which only 3.2 million tonnes a year are dug up and shipped through Milne Inlet.

And that, the QIA says, breaches the IIBA. The Mary River mine’s “intended capacity” is clearly 60 per cent of 18 million tonnes a year, not 3.2 million tonnes per year, the QIA’s lawyers repeatedly insisted.

QIA lawyers Terrence O’Sullivan and James Renihan told the panel that when they signed the IIBA, the QIA and Baffinland agreed only on that figure, and not on some smaller amount.

The annual 18-million-tonne annual production level, which would be achieved via railway and seaport, is what the Nunavut Impact Review Board recommended and the federal government approved in the project certificate for Mary River that was issued in 2012.

And that 2012 permit is still in effect and has not been legally replaced by the smaller 3.2-million-tonne-per-year early revenue phase that the company is now operating with, using trucks running along a road to Milne Inlet instead of a railway.

“The fact that it [the original 18-million-tonne rail-port proposal] is deferred does not mean it is unintended,” Renihan said.

To support that argument, O’Sullivan and Renihan cited statements that Baffinland made in numerous documents, including news releases and its Final Environmental Impact Statement for the Mary River project.

And they accused the company of using the lower production levels of the early revenue phase to dodge its advance payment obligations.

“The company cannot unilaterally go into an early revenue phase and truncate the advance royalty payments,” O’Sullivan said near the end of the hearing, which was broadcast live on a video webstream.

Furthermore, Baffinland itself admits that it still plans an 18-million-tonnes-per year project, for which the regulatory permits are still valid.

If that happens, the project could have the potential to become a 21-million-tonne per year operation, QIA lawyers said.

In any case, the point at which the advance payments should stop is when production reaches 60 per cent of 18 million tonnes: about 10.8 million tonnes a year, the lawyers said.

Right now, production at Mary River is nowhere near that level, since the company still awaits permitting for its Phase 2 expansion plan, which now involves a railway to an expanded port at Milne Inlet.

Another issue is Baffinland’s non-payment of the $2.5 million owed to the QIA for the last two quarters of 2015.

The two sides agree that Baffinland owes the money—but the company hasn’t paid it yet.

“There is no dispute over whether two payments are still owed to QIA for 2015. Baffinland has chosen to simply not pay these…,” a QIA spokesperson told Nunatsiaq News in an email.

To that end, O’Sullivan asked the panel for an order requiring that Baffinland pay that $2.5 million, subject to an agreed interest rate equal to the Royal Bank of Canada’s prime rate plus two per cent.

When it filed its statement of claim in August 2016, QIA claimed $6.25 million in advance payments.

But in the months since then, that figure has grown.

Instead of the advances, Baffinland has made royalty payments for 2016, based on 1.9 per cent of the company’s net sales, which QIA has accepted as partial payment on its advances, the spokesperson said.

Another tidbit that emerged from the panel hearing was current figures on Inuit employment at the mine.

In response to a question from panel member Thomas Berger, Baffinland lawyer Brad Armstrong said 144 Inuit are employed at Mary River by either Baffinland or its various contractors.

That amounts to 12 per cent of the total Mary River workforce, and about $8 million a year in wages.