“There’s not a level playing field” 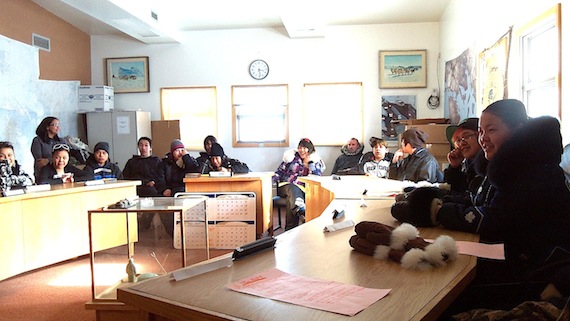 Students are pictured in class at Igloolik’s Ataguttaaluk high school in 2011. A new study looking at truancy in Nunavut shows that almost a quarter of students drop out when they have their own children and can’t secure childcare. (FILE PHOTO)

A new look at high school attendance across Nunavut shows that students’ relationships — with their parents, friends and their own young children — have the biggest influence on a student’s decision on whether they stay in school.

From 2001 to 2014, the average attendance rate among high school-age youth in Nunavut stood at about 60 per cent.

Over that same period, only a third of 18-year-olds graduated from school in the territory.

“It really sparked my interest; why is that?” said Melanie O’Gorman, an assistant professor of economics at the University of Winnipeg.

As part of her research, O’Gorman and colleague Manish Pandey spoke to 310 students currently enrolled in secondary school, aged 14 to 18, and to another 260 youth 32 years of age and under, who no longer attend school.

The researchers used the age limit of 32 years to capture students who have been educated in Nunavut since the territory’s creation in 1999.

O’Gorman found — as other research studies have — that parental engagement appears to play the biggest role in a student’s desire to attend school.

If the student’s parent has completed high school and obtained a job thanks to their education, the student is more likely to see education as something of value.

But friends are also a major factor in a student’s commitment to school. Having a friend who has dropped out of school increases the likelihood of a student also leaving school by 15 per cent, the study shows.

“We were surprised to find that the influence of friends was in many ways even stronger than having a parent who completed their education,” O’Gorman said.

“A lot of kids would say ‘I was just hanging out with my friends,’” she said. “It’s a sense of belonging and companionship; relationships are important at any age, but particularly at this age.”

The peer effect was also noted as a major factor in alcohol and drug use among high school-age students, O’Gorman found.

Among the most common reasons students cited for missing or dropping out of school was having their own children, and not being able to secure steady childcare.

“We asked and 14.3 per cent of respondents said it was because they had a baby,” O’Gorman said. “And then the fourth most common response was that ‘I had to babysit’, or ‘I had no daycare.’

“So that’s almost a quarter of students saying … it’s because of having a baby at high school age.”

That points to a need to examine the use of Nunavut’s Young Parents Stay Learning program, O’Gorman said, and even how general childcare subsidies are made available to Nunavummiut.

As students were surveyed, they were also asked about basic needs: do they have a bed of their own? A quiet place to study? And sufficient food to eat every day?

“For all three of those, there was an alarming proportion of kids who said no,” O’Gorman said. “So there’s not a level playing field.”

The issues around food security and overcrowded housing that came up in students’ responses highlight the need to consider the territory’s social housing program and Nutrition North Canada as part of education policy, she said.

While Nunavut’s education department is now looking at ways of curbing the practice of social promotion, or social passing, O’Gorman found that students who are lagging in their studies are missing class due to the stigma of having to repeat a grade.

“But what we heard, by and large, for students who are held back, is there just isn’t enough funding for student support to give them the support that they need,” she said.

“A lot of students indicated that they just dropped out because they felt so far behind, often because of language.”

“Our key recommendation to the department of education is that … teachers are dealing with enough variation of needs within the classroom, but when you have a kid that’s been held back three years, they need extra support.”

So what is working in favour of Nunavut students?

O’Gorman’s study found that students who hold a part-time job while they are in school have an 18 per cent greater chance of graduating from high school.

It also found that youth who spent time on the land were 13 per cent less likely to drop out of school.

“Our interpretation of that is that kids who are connected to their traditions have a stronger cultural understanding, which in turns leads to higher self-esteem and academic success,” O’Gorman said.