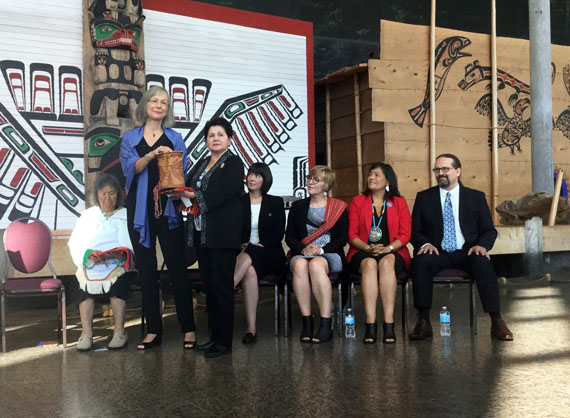 Marion Buller, named chair of the commission overseeing the inquiry into Missing and Murdered Indigenous Women and Girls, is flanked by fellow commissioners last August following the formal announcement of the inquiry in Gatineau, Que. Eight months into its two-year mandate, the inquiry has yet to begin collecting evidence. (PHOTO COURTESY OF GOV. OF CANADA)

Pauktuutit Inuit Women of Canada has been granted standing to take part in the National Inquiry into Missing Indigenous Women and Girls.

This designation positions Pauktuutit as an official participant at the inquiry’s upcoming events, including its first community hearing in Whitehorse, Yukon starting May 29, at a meeting with inquiry commissioners in June, and later this summer at an expert panel on family violence.

“It will allow Pauktuutit to bring the national voice of Inuit to the inquiry,” said Pauktuutit’s president, Rebecca Kudloo.

They’ll be represented by their legal counsel, Beth Symes, and a member of Pauktuutit’s executive, Kudloo said.

The inquiry announced last week that it had shifted its approach and timeline; rather than regional advisory meetings beginning this spring, commissioners will start to make community visits in the fall.

“We’ve had concerns that it’s not progressing as much as we’d like to see,” Kudloo said. “The first year’s almost over.”

Pauktuutit isn’t alone in its criticism. This week a group of Indigenous scholars, activists and other groups sent an open letter to Chief Commissioner Marion Buller saying delays and poor communication have caused frustration and anxiety among families who have lost loved ones.

The inquiry has responded to some of the Inuit community’s initial concerns by hiring Inuit staff and translating a portion of its web page into Inuktitut.

“They’ve said they’ll only come to communities when they’ve been welcomed,” Kudloo said. “But we’re telling them, you are welcome in our communities. We don’t want the North to be left out.”

Rankin Inlet is the only Inuit community that Pauktuutit is aware of having made a formal request to have the inquiry visit and collect testimony, although the inquiry has yet to announce a schedule for community visits.

The upcoming hearing in Whitehorse will give Pauktuutit an idea of how those visits will take place, Kudloo said, and how to tweak them to respond to the needs of Inuit communities.

For one, Pauktuutit has asked to have counselling services in place before, during and after each visit, for Inuktut-language interpreters, and for commissioners to communicate directly with communities, preferably through radio, to share details and updates on the inquiry.

Kudloo also said it’s crucial that the inquiry visit different regions of Inuit Nunangat, as the issues facing women vary from one place to another.

“We want this inquiry to work,” she said. “This inquiry has to be meaningful to Inuit.”

Families and individuals who wish to get in touch with the commission can call toll-free 1-844-348-4119 or email Profile@mmiwg-ffada.ca with their name, contact information and location.