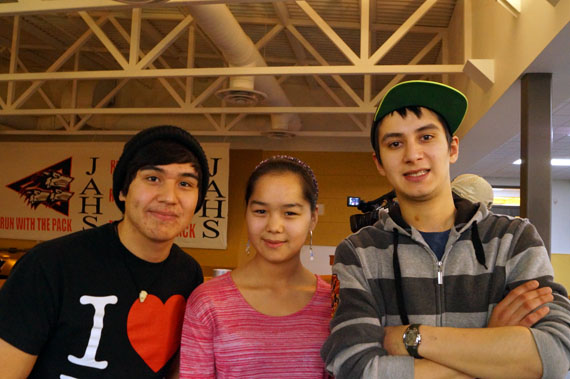 Arviat Film Society members, from left, Calvin Pameolik, Charmaine Komak and Abe Eetak were on hand to help launch the society’s new community television channel Nov. 28 at Arviat`s John Arnalukjuak high school. Besides its locally-produced programming, Arviat TV is also a research network and a digital archive, which will eventually host hundreds of hours of traditional knowledge and footage from the Nanisiniq Arviat history project. The channel has been a big hit so far, say society members, broadcasting throughout the day at the local co-op store and in peoples’ homes. Viewers in Arviat can tune into channel 19; viewers outside the community can also watch the broadcast at www.isuma.tv. (PHOTO COURTESY OF THE AFS)