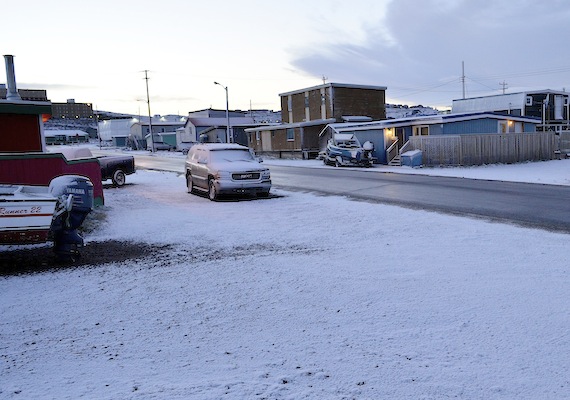 Early risers in Iqaluit this morning would have been greeted with the gift of a late summer snowfall, as shown here about 20 minutes before dawn at 4:45 a.m. The temperature at the time was -1 C with winds of about 22 km/h. But watch out for high winds. Environment Canada predicts winds will rise later in the day to between 40 km/h and 60 km/h, gusting to as high as 80 km/h with temperatures reaching 7 C. Snow has already fallen in many other Nunavut communities. In Alert, at the top of Ellesmere Island in Nunavut, more than 17 centimetres of snow already lies on the ground and the temperature there fell to -12.7 C on Aug. 24, the lowest August temperature reading for the military station and the third lowest August temperature reading that has ever been recorded around sea level in North America. (PHOTO BY JIM BELL)