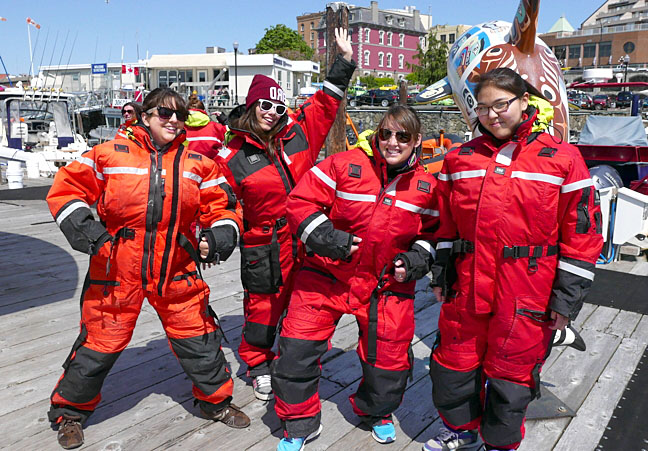 Cambridge Bay high school students Katelyn Wilson, in red tuque, and Teghan Angulalik, far right, go whale-watching in the Pacific Ocean during a recent trip to the third annual Oceans Network Canada symposium at the University of Victoria May 1 and May 2. With them are Cambridge Bay teacher Rhonda Matheson, far left, and the ONC’s Natasha Ewing. ONC gathered together more than three dozen students from British Columbia, along with the two Kiilinik High School students (with financial help from the Kitikmeot Inuit Association), to promote careers in marine science and technology. ONC has a special relationship with Cambridge Bay; in 2012, the organization launched an underwater observatory just offshore of Cambridge Bay. The observatory measures such things as water temperature, sound, salinity and ice thickness and has a camera which captures action on the seabed. ONC has been partnering with Cambridge Bay residents and schools to examine the data and better understand the Arctic Ocean environment. (PHOTO COURTESY OCEANS NETWORK CANADA)