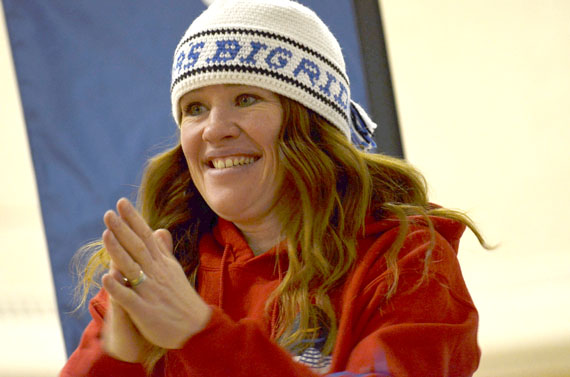 Six-time Olympic medalist Clara Hughes visited Iqaluit May 1 as part of a trek across Canada called “Clara’s Big Ride.” The campaign is aimed at raising public awareness of mental health issues. Hughes is in the middle of a 12,000-kilometre cycling trip across Canada from March 14 to July 1. The principal of Aqsarniit middle school, Don Peters, presented Hughes with an Aqsarniit sweatshirt after she gave a talk to dozens of kids gathered inside the school gym. Read more about Hughes’ visit later on NunatsiaqOnline.ca. (PHOTO BY DAVID MURPHY)