“The best part of the experience was the people” 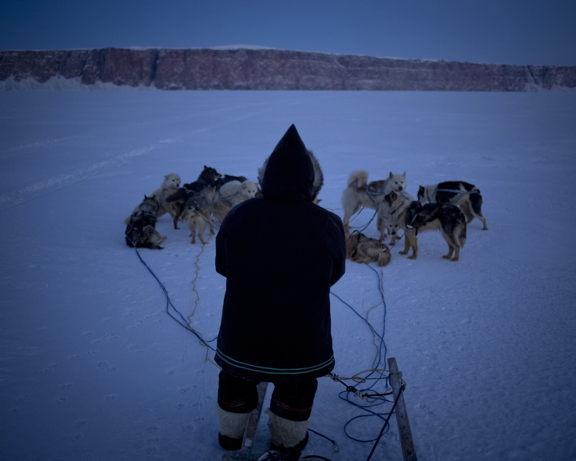 Peugatuk Ettuk, an Arctic Bay elder and dog musher, took photographer Acacia Johnson to an outpost camp several hours outside of Arctic Bay for a night out on the land in late January 2015. He has since passed away. (PHOTO BY ACACIA JOHNSON) 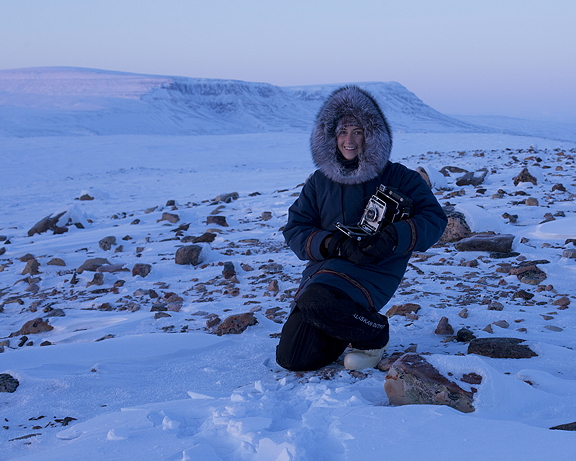 A self-portrait on the land with Peugatuk Ettuk in January 2015. (PHOTO BY ACACIA JOHNSON) 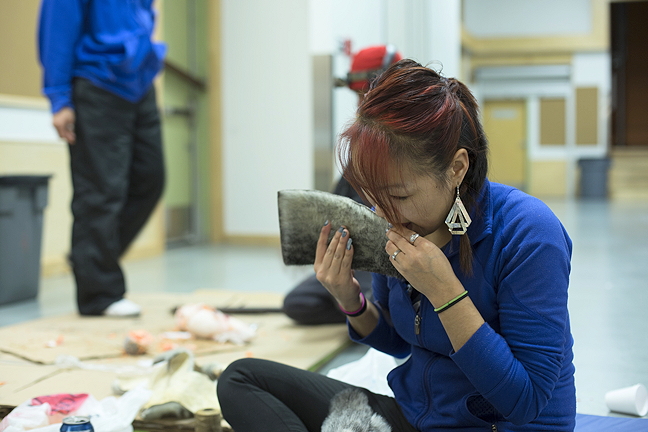 OTTAWA — It’s fair to say Acacia Johnson knows the North but nothing could have prepared her for the remarkable experience she had spending four months living with a family in Arctic Bay.

And it’s funny because as a landscape photographer, her plan was to photograph dark, winter landscapes above Canada’s Arctic Circle. But instead, what she was really drawn to was the people.

The Alaska-born Johnson, a photographer who, when she stops long enough, calls Norway home, spent from November to the end of February in North Baffin thanks to a $15,000 Fulbright Canada Student Award and money she raised on her own.

Fulbright has made an exhibition of her works entitled “Under the Same Stars (Ulluriat ataanittuinait)” — 18 large format indigo scenes — which will be on display in downtown Ottawa, at Constitution Square Lobby, from April 22 to April 24.

With artistic and professional goals in mind and plenty of research completed on the cultural significance of various places in and around Arctic Bay, population 850, the young photographer tried to hit the ground running upon arrival.

But she soon discovered the pace of Arctic winter was slower and more deliberate than she was used to.

And so she slowed her own pace. She made friends. She learned to sew — well enough that she made herself two parkas, three pairs of mitts and a pair of sealskin kamiks. That was helpful, she said, because the gear she brought wasn’t warm enough.

While in town, she stayed with Sheba Ejangiaq and Joe Kigutaq and their children — she was even a bridesmaid at their wedding during her stay — and so she spent a lot of time with them and their extended family members. She shopped and cooked with them.

She also got to know an elder named Peugatuk Ettuk. He had a dog team, she said, and kept telling her he would take her to the outpost camp where he was born. She was gracious but doubted it would actually happen. And then one day, in late January, it did.

There are experiences you remember which grow in significance as the years pass. And then there are times when you know right away that what you are feeling and seeing is changing you, fundamentally, on the spot. That trip with Ettuk was just that.

“I got to drive the dog team across the ice while he was on his skidoo. He reached under a rock at one point and pulled out his mother’s shoes,” she said.

“He pointed out tent rings where people lived, people I knew from Arctic Bay. He showed me the good ice for drinking water and how to cook in a tent. We walked along the coastline and he talked about his childhood experiences. It was incredible.”

Johnson learned recently that Ettuk has since died. It was painful news.

She feels privileged to have met him, and to have spent time with other generous storytellers and skilled craftspeople and hunters.

They taught her many things, she said, most importantly the benefit of spending months in one place so that relationships, with people and landscapes, can grow slowly and more naturally. She’s hoping to shape future projects around this lesson.

Johnson said she plans to be there to greet visitors and answer questions.