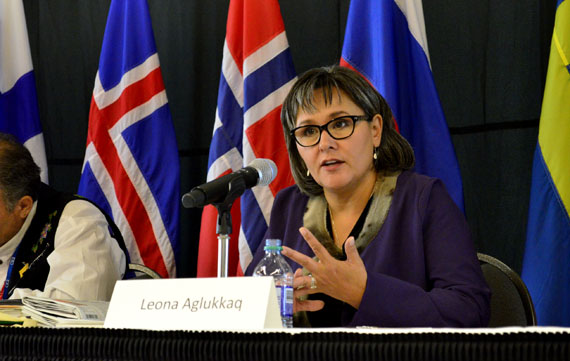 Former Nunavut MP and Canadian Arctic Council chair Leona Aglukkaq speaks Sept. 29 at Carleton University in Ottawa at an event held to mark the 20th anniversary of the founding of the Arctic Council. The eight-nation international body was born Sept. 19, 1996 when representatives from Canada, Denmark, Finland, Iceland, Norway, the Russian Federation, Sweden and the United States signed a document now known as the Ottawa Declaration. In a speech that looked back on her work with the Arctic Council in 2013-14, she said she is proud to have pushed for the recognition of traditional Indigenous knowledge. “There is a wealth of knowledge there for scientists to tap into,” Aglukkaq said. Read more about the event later, on nunatsiaqonline.ca. (PHOTO BY JIM BELL)