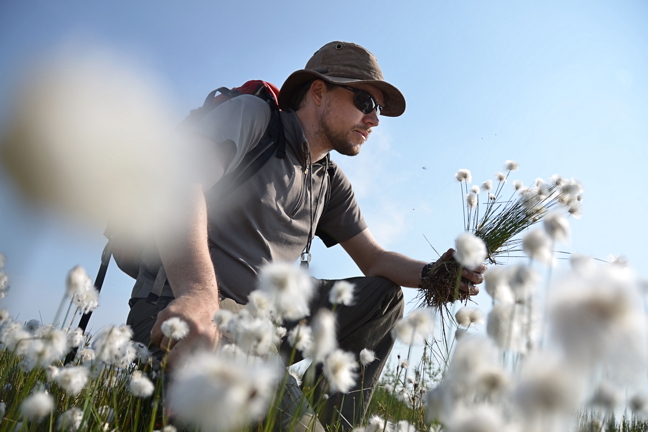 Dr. Jeff Saarela collects Arctic cotton specimens in the Kitikmeot in 2014 as part of the Canadian Museum of Nature’s Arctic Flora of Canada and Alaska project. A flora is an inventory of plant species growing in specific locations, and Arctic regions have been sorely lacking in such an inventory. The project is timely because botanists want to get a snapshot of what’s growing in the Arctic now before that evolves under the impacts of climate change. This is the sixth major botany trip for the museum team of Saarela and Roger Bull who have surveyed several Nunavut locations including the Soper River valley and areas outside of Kugluktuk. This year’s trip, to islands and mainland regions near Cape Dorset for most of July, was a bonus; they were invited to join a team of wildlife researchers from Environment Canada. They plan to help those researchers identify plant species and also collect their own specimens for the flora project. (PHOTO BY ROGER BULL)