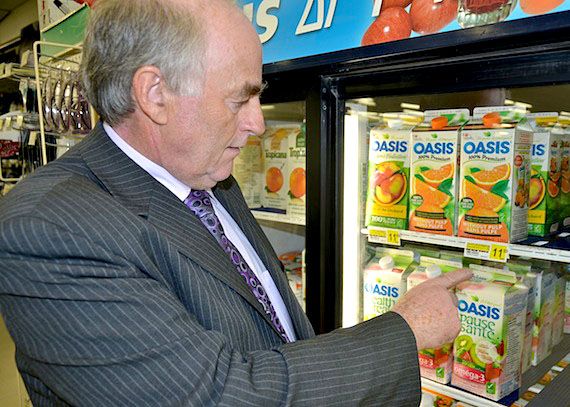 Gérald Lemoyne, who is running for the Liberal party in the Ungava riding, takes in the high cost of juice in Kuujjuaq. With only days left before the Sept. 4 Quebec election, Lemoyne came to Kuujjuaq Aug. 30, along with Guy St-Julien, a former Liberal MP for the Abitibi-James Bay-Nunavik-Eeyou riding, to rally more votes in Nunavik. Recent polls, which show support among francophones in Quebec at roughly 20 per cent, put the Liberals in third place in the provincial vote. In an open letter circulated Aug. 31, the Projects Autochtones du Québec, which runs a shelter in Montreal, said candidates in the Sept. 4 had largely ignored “the difficult economic situation that exists in many First Nations communities in Quebec, the overcrowding situation in homes (Inuit in Quebec face the highest rate of overcrowding per home in all of Canada), lack of employment opportunities, lack of economic opportunities, the high drop-out rate and the high rate of youth suicides, brings a host of social problems among families and in communities.” (SUBMITTED PHOTO)