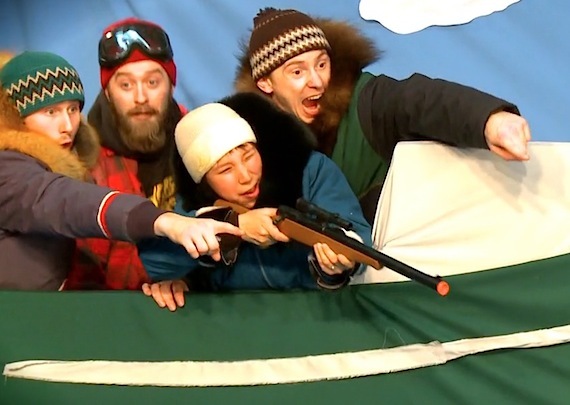 Here’s a scene from the first music video featuring Iqaluit’s Jerry Cans band with their song, Mamaqtuq, from their debut album Nunavuttitut. Made in collaboration with Nunavut filmmaker Stacey Aglok MacDonald, the music video was produced with money from the Government of Nunavut’s culture and heritage department.”There aren’t too many music videos from Nunavut so we are excited to share what we have been working on and see what the reaction is. Hopefully this will be the first of many,” said video director Nooks Lindell. The Jerry Cans describe their video as “a light-hearted portrayal of a spring time seal hunt,” which includes the faces of many Iqaluit community members, elders, and youth. You can see the video on https://vimeo.com/75218134.