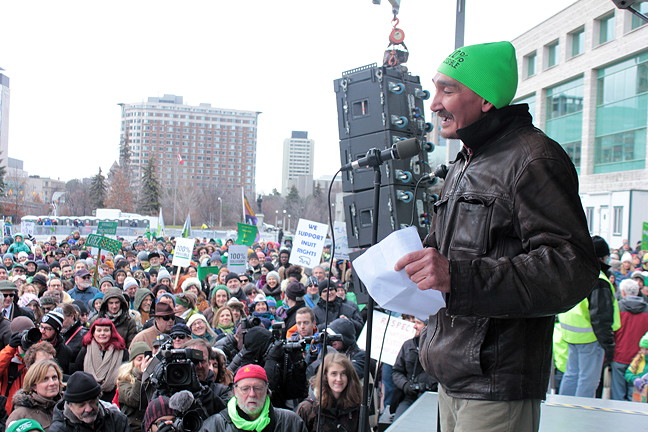 Jerry Natanine, mayor of Clyde River, speaks to thousands in front of Ottawa city hall Nov. 29, prior to a march on Parliament Hill in support of renewable energy. The event, called 100% Possible and organized by Ecology Ottawa, was timed to coincide with the start-up of the United Nations COP 21 climate change talks, which get underway Nov. 30 in Paris. It was described by some media as Ottawa’s largest ever public rally. Natanine, who was invited to speak thanks to the public profile he’s earned fighting oil and gas seismic testing off Baffin Island, admitted he was nervous before taking the stage but the audience cheered several times during his speech and some even waved signs which read “We Support Inuit Rights.” Canada’s best known environmentalist, David Suzuki garnered a few cheers as well following Natanine’s speech. Read more about the rally later on nunatsiaqonline.ca. (PHOTO BY LISA GREGOIRE)