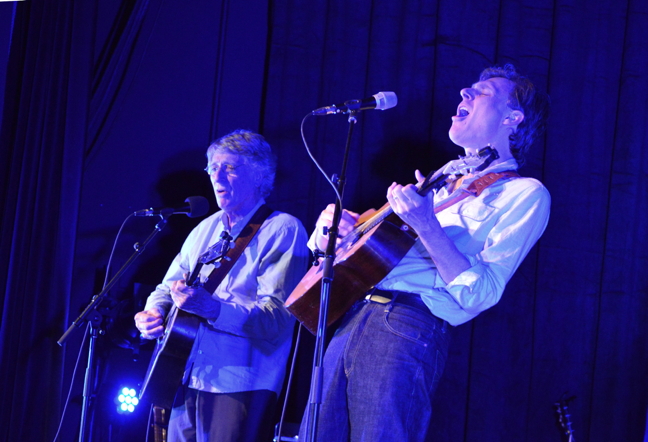 Alianait’s summer arts festival in Iqaluit kicked off in style, June 29, with a rambunctious and stylized set courtesy of Joel Plaskett and the Emergency, with special guest Bill Plaskett, Joel’s father. “I’m thrilled to be here again,” Plaskett told concert-goers from the stage inside Nakasuk Elementary School, “in this spaceship of a school.” Plaskett got his first taste of Nunavut in 2015, playing two solo sets in Iqaluit and another in Igloolik. This time, the Nova Scotia boy returned north with his full band and the show was both louder, and more animated. He chided his audience for not getting up to dance, while he zig-zagged across the stage expertly playing his electric guitar. By the time the show ended, Plaskett had goaded enough people into dancing alongside the stage that he joined them during his band’s closing number. The Alianait Arts Festival starts in earnest June 30 with another full concert at Nakasuk starting at 7 p.m. Alianait concerts, workshops and other special events will continue over the Canada Day long weekend, concluding on July 3. See the Alianait website for details. And see more photos from the Plaskett show on our Facebook page. (PHOTO BY STEVE DUCHARME)