Photo: Many voices, one song 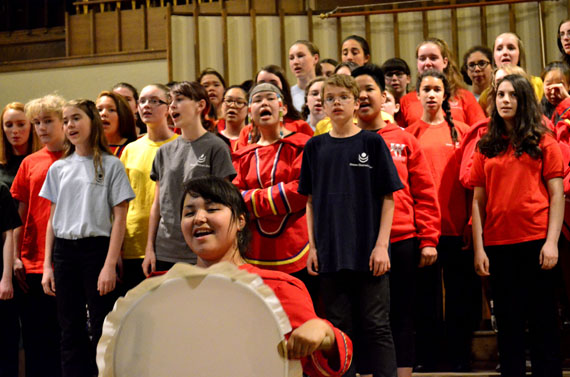 June 27 was a big day in Ottawa for the Inuksuk Drum Dancers and the Iqaluit Fiddlers. In the morning, they visited Rideau Hall, watched the inspection of the ceremonial guard and met Governor General David Johnston. In the evening they joined their voices with the Ottawa Children’s Choir for a concert — part of the Nipiit Katittut Voices United project — at Woodroffe United Church. There, they won repeated standing ovations for a program that included throat singing, drum dancing and choral renditions of numerous Inuit language compositions. They closed the evening with combined choir performances of Inngiqtuq, written for them by composer Mark Sirett, and Quviasugitsi, a popular song by Paul K. Irksak of Arviat. Their visit to Ottawa continues until July 3 and will include participation in a massed choir on Canada Day and a performance at the Inuit Children’s Centre. (PHOTO BY JIM BELL)