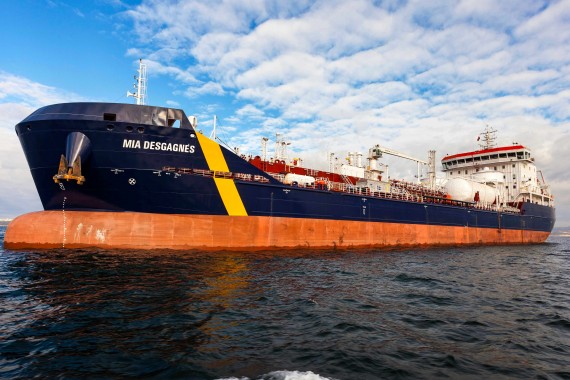 Meet the Mia Desgagnés, Groupe Desgagnés Inc.’s newest tanker. The ship is capable of running off three types of fuel: heavy fuel oil, distillate fuel and liquefied natural gas. That could help prepare the company, which resupplies Canada’s eastern Arctic, to meet the federal government’s commitment under the Polar Code to phase out the use of heavy fuel oil in Arctic waters. Such fuels turn into a thick goop when spilled in icy waters, making clean-up extremely difficult. Groupe Desgagnés says the ship is the first of its kind to hold a Polar 7 ice-class rating. The vessel, which was built in Turkey, cost more than $50 million, of which more than $9 million was spent on its fuel systems. The Quebec government contributed $700,000. “It is a very significant investment, clearly showing Desgagnés’s commitment to sustainable development, and is in line with the environmental objectives of the government of Québec,” said Louis-Marie Beaulieu, the company’s CEO, in a statement. (PHOTO BY GROUPE DESGAGNÉS INC.)