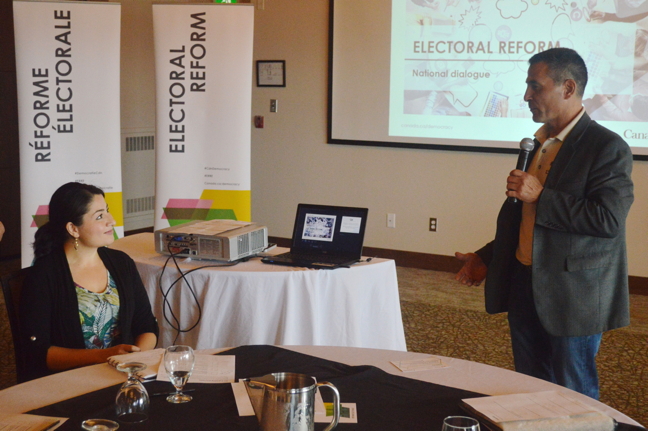 Nunavut MP Hunter Tootoo thanks Maryam Monsef, the federal minister for democratic institutions, at the conclusion of her sparsely-attended Iqaluit presentation on electoral reform in Canada, Aug. 29. Monsef highlighted several potential ways the Trudeau government might change the current electoral system such as mandatory voting, online balloting, accountability and alternatives to Canada’s current first-past-the-post system for electing MPs. Tootoo — who faces an ongoing public backlash over a relationship he had with a staffer that cost him his cabinet job and his membership in the Liberal caucus — said criticism is just part of the job. “Anyone that’s a representative for anywhere, whether it being a municipal level, a territorial level, a federal level, Inuit organization level — your job is to represent the people that you represent and you have to be willing to hear when people are happy with you and when people aren’t. Your job is to listen to everybody, that’s part of the process and an important part of the process,” Tootoo told Nunatsiaq News. Read more later on Monsef’s presentation on nunatsiaqonline.ca. (PHOTO BY STEVE DUCHARME)