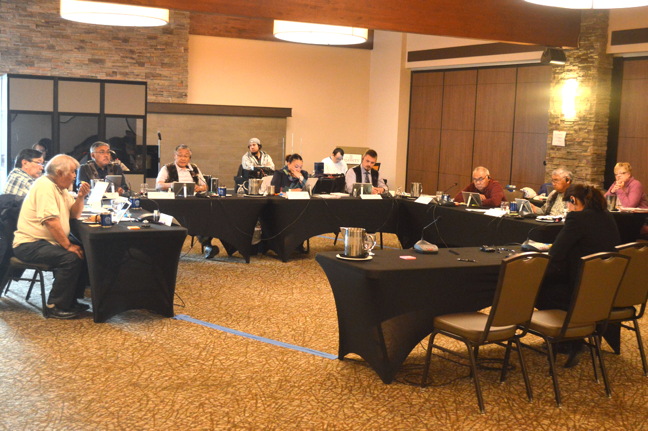 Nunavut Tunngavik Inc. board members, at a directors meeting in Iqaluit’s Frobisher Inn Sept. 1, congratulate each other for a surplus 2015 fiscal year, which allowed the Inuit land claim organization to eliminate one-third of its remaining debt to Nunavut Trust. That debt now stands at $21 million, down from the $149 million NTI first borrowed from the Trust following the Nunavut Land Claims Agreement in 1993. But fiscal restraint in 2015 didn’t stop NTI from announcing new ventures for beneficiaries. One charity, entitled Nunavut Tunngavik Foundation, will use millions in leftover surplus from the Indian Residential School Settlement Agreement to finance cultural and identity programs for Inuit in Nunavut. Also, the Harvester Support Program, under review since 2014, will also be re-tooled into a charitable entity under the direct control of NTI, vice president James Eetoolook told Nunatsiaq News in a statement. Read more later at nunatsiaqonline.ca. (PHOTO BY STEVE DUCHARME)