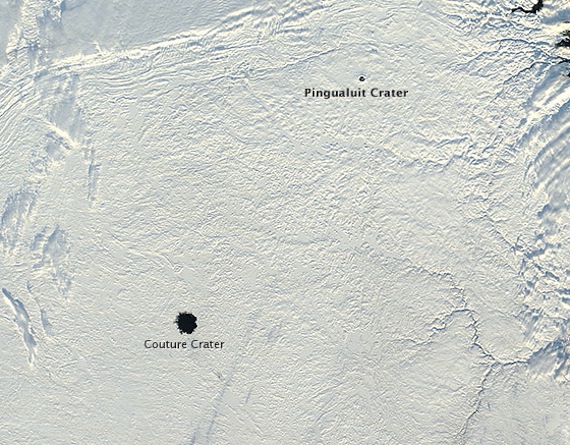 When NASA’s Aqua satellite passed over Nunavik on Nov. 25, snow and ice had transformed the landscape of the Ungava Peninsula. Just two areas, both near-perfect circles, remained free of ice. These ice-free areas, seen above, are the Pingualuit and Couture craters, formed millions of years ago by meteorites striking the surface. Today these craters hold deep lakes. Couture is roughly eight kilometres wide and has a water depth of 150 m; Pingualuit’s lake is about three km across and has a depth of 246 m. “The crater lakes hold such huge volumes of water in comparison to the surrounding glacial lakes that they’re slower to respond to temperature changes,” Reinhard Pienitz, a fresh water lake expert who has collected sediment cores from Pingualuit, said in a NASA update. “Pingualuit Crater Lake is always the last to freeze in the winter and the last to melt in the spring.” Still, Pienitz said he found it surprising that the crater lakes were ice-free so late in November. Pingualuit usually has open water for just six-to-eight weeks in August and September. Pienitz said he suspects the unseasonably warm summer played a role in keeping the lakes ice-free so late this year. Meteorological records from Environment Canada show that average temperatures at weather stations near the lakes have been above normal for every month since July. To learn more about the impact of climate change in Nunavik, Nunatsiaqonlineline.ca brings you special coverage of “Nunavik and Nunatsiavut: From Science to Policy. An Integrated Regional Impact Study of Climate Change and Modernization,” released Nov. 29 in Kuujjuaq. (PHOTO COURTESY OF NASA)