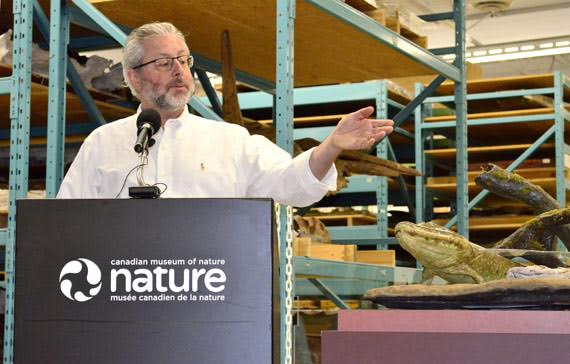 Say hello to Mr. Tiktaalik (right), also known as Tiktaalik roseae. He’s kind of ugly and he’s 375 million years old but the researchers who found him, including Neil Shubin, a professor at the University of Chicago (left), believe his discovery in 2004 on southwest Ellesmere Island represents one of the most important events to date in the history of evolutionary biology. That’s because he was a fish who was able to use his fins to crawl onto land and developed primitive lungs as well as gills, making him one of the first vertebrate creatures to transition from water to land. His fossilized remains belong to Nunavut and are stored at the Canadian Museum of Nature’s fossil collection in Gatineau, Que. until Nunavut builds a suitable facility of its own. Read more later on Nunatsiaqonline.ca. (PHOTO BY JIM BELL)