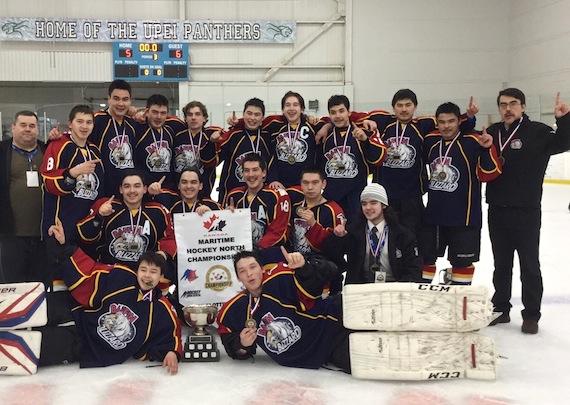 Team Baffin Blizzard, with representatives of Nunavut’s highest level of hockey, pose as winners of the 2015 Maritime Hockey North Junior Championships in Charlottetown, Prince Edward Island, March 29. The Blizzards battled against four of the best teams at the Junior C level from New Brunswick, Nova Scotia, and P.E.I. to win the championship for Nunavut for the first time in the tournament’s 13-year history. “They just never gave up, right to the very end,” said coach Mike Gardner. The Blizzards defeated the Southside Lynx of P.E.I., 6-5 in the final game. The victors set out on their long journey home the next day, passing through Moncton, N.B. and Ottawa, and were expected to arrive in Iqaluit with their medals on March 31. (PHOTO COURTESY OF MIKE GARDNER)