Photo: Tuktu took to the stage for Alianait opener 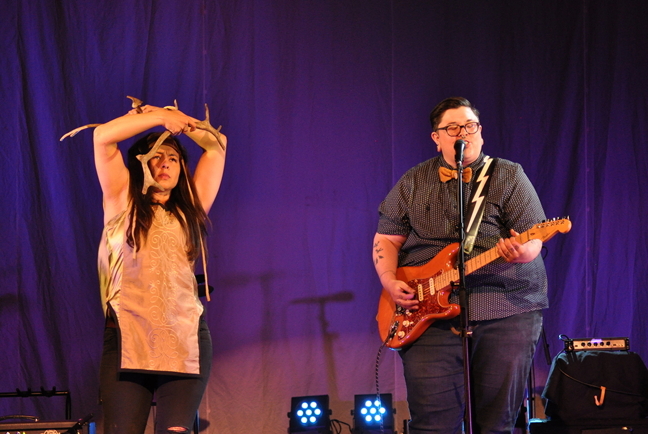 Tiffany Ayalik, left, channels her inner-caribou during the opening concert of the 2016 Alianait Music Festival at Iqaluit’s Nakasuk Elementary School June 29 while Grey Gritt, right, provides the music for Ayalik’s interpretive dance. The Yellowknife duo, who go by Quantum Tangle, were one of four performances that opened the five-day annual festival, which is in its twelfth year. Quantum Tangle regaled a few hundred Iqalungmiut June 29 with story telling and songs while the audience cheered on their political messages. The festival’s big top tent is set up in front of Nakasuk school now with musical family-friendly events planned throughout the festival. The Elder’s Qammaq will also host many daytime activities for music lovers of all ages. Go to our Facebook page for more photos from the event. See the full schedule at Alianait’s website. (PHOTO BY THOMAS ROHNER)