“Survivability is at zero per cent” 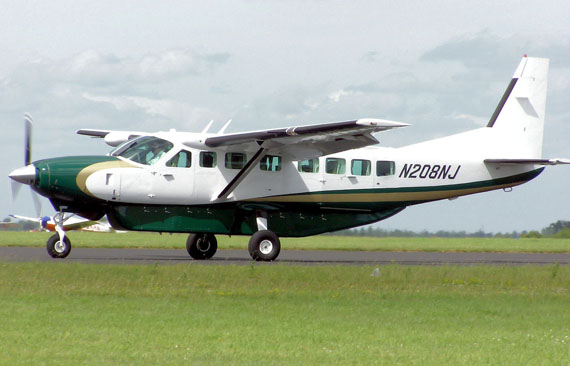 This public domain image shows the type of aircraft that went down in Hudson Bay Sept. 25, a Cessna 208. The RCAF found debris on the morning of Sept. 26 but no sign of the pilot, who was the only occupant of the plane. The owner of the aircraft and the identity of the pilot have not been released. (WIKIMEDIA COMMONS IMAGE)

One person is missing and presumed dead following the Sept. 25 crash of a Cessna 208 aircraft in Hudson Bay in Nunavut waters, about 480 kilometres east of Churchill, Manitoba, the RCMP said Sept. 26 in a news release.

The small nine-seater aircraft carried only the pilot, and no passengers, police said.

“It was an unscheduled flight,” he said.

Fowler could not confirm any other details because of the current investigation, saying that “it’s a very, very difficult situation” for the company right now.

The Royal Canadian Air Force had alerted the RCMP’s “V” Division when the Cessna activated an emergency beacon Sept. 25. That prompted the search by the Joint Rescue Coordination Center in Trenton, Ont.

On the morning of Sept. 26, a Hercules aircraft dispatched by the JRCC found debris, consistent with a plane crash, around the last known location of the missing aircraft.

But the RCAF did say the aircraft was on a flight out of Sault Ste. Marie, Ont. when its emergency beacon was activated.

The search was called off the morning of Sept. 26 when the rescue team looked at debris in the search area, said David Elias, a public affairs officer for the Royal Canadian Air Force.

“With the assessment of the damage or whatever’s found on the ground, that will give us some indication of survivability,” Elias said.

“Even though from what we saw, survival was highly unlikely based on what the wreckage looked like,” he said.

Elias said the team kept looking for a person in the water even after they saw survival as unlikely, but JRCC eventually determined survivability was at zero per cent.

“Based on projection models on water temperature and proximity to land and what the person likely was equipped with — once we reach a point where survivability is at zero per cent, then at that point we’re fairly confident there’s nothing we can do to find the survivor,” Elias said.

“Our thoughts and prayers are with the family and friends of the pilot. It’s not an easy time for them right now.”

“Hopefully at least the fact that we were able to find something is better than nothing,” he said.

Hercules aircraft from Trenton and Winnipeg, along with a Transport Canada Dash-8 and a privately owned tugboat helped with the search, Elias said.

Introduced in 1982, the Cessna 208 is often used by charter firms to carry passengers or cargo.

The Transportation Accident Investigation and Safety Board is investigating the incident with the RCMP and the Office of the Chief Coroner of Nunavut, the news release said.

“The RCMP would like to acknowledge the efforts of the RCAF, Transport Canada, Nunavut Protection Services and other partners in the search for the missing aircraft,” the release said.