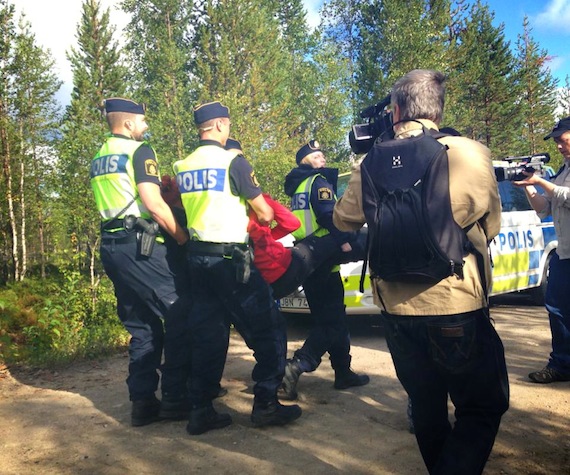 Swedish police carry off a Saami politician Aug. 21 during the latest round of arrests intended to break up the Saami blockade of a iron mine project. (PHOTO BY HENRIK BLIND/FACEBOOK)

Saami in Arctic Sweden clashed again with police Aug. 21 when police attempted to break the Saami blockade of an access road to the site of a huge iron mine project.

Police carried off several Saami activists, including one politician who was singing a traditional Saami joik song as she was carted off, a Facebook news page said Aug. 12.

Since July, Saami have been at a blockade set up to prevent workers from Beowulf Mining PLC and its Swedish subsidiary, Jokkmokk Iron Mines AB, from continuing their drilling and exploration project in Gállok, not far from Jokkmokk, a town of 3,000 located just above the Arctic Circle.

Aug. 21 marked the third time that police have swept into the blockade set up by the Saami-led protesters — on Aug. 12 police arrested six protesters who had chained themselves to pipes in the ground, dug trenches and blocked the road with debris.

In July, police arrested nine people in a similar effort to stop the blockade. This time, police wanted to clear the area so heavy machinery and drilling crews could enter the mine project site, Swedish newspapers reported.

According to information on Beowulf’s mining site, the mine project area is thought to hold more than 100 million tonnes of high-grade iron ore.

To power a future mine in Gállok, known as Kallak in Swedish, the company could turn to a major hydroelectric complex located only a few kilometres away.

The Swedish Saami region of Sápmi — the large homeland of indigenous Saami people that spreads across Norway, Sweden, Finland and Russia — has already been “exploited and colonized by the Swedish state and corporations for generations,” says a blog about the blockade.

Now an entirely new area is “under attack from the mining industry,” the bloggers say.