Tip leads to seizure of vodka, beer and “mixed alcohol” 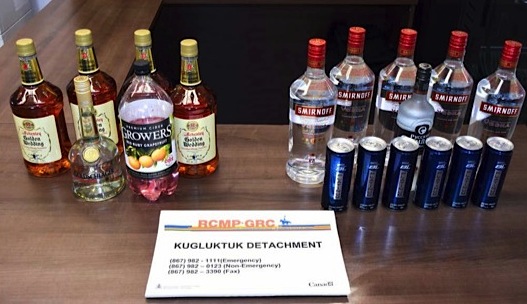 Here’s a look at the booze seized by the RCMP this week in Kugluktuk. (HANDOUT PHOTO/RCMP)

Police in Kugluktuk stopped a small quantity of illegally-imported alcohol March 20 from entering the western Nunavut community of 1,600.

Kugluktuk RCMP received a tip that local residents would be flying back into the community with a quantity of alcohol that did not have the proper paperwork.

The Hamlet of Kugluktuk is a restricted community where an elected alcohol education committee must approve all alcohol permits for community residents.

“Substance abuse has been a priority for our detachment and will remain a top priority for the future of this community.

“Our goal is to partner with our local stakeholders to educate the community regarding alcohol consumption and the negative impact that substance abuse has on domestic violence, mental health and employment” said Cpl. Jean-Luc Bedard, the RCMP detachment’s commander.

“This detachment wants to make a difference and contribute to a safer and healthier Kugluktuk. But in the end, we cannot resolve the community’s issues without the help of the community and that’s the message we want to communicate.”

The RCMP release encouraged people in Kugluktuk to contact the local RCMP detachment to provide any information about illegal alcohol as well as other criminal activities.

The Kugluktuk RCMP thanks everyone who assists in these types of investigations.