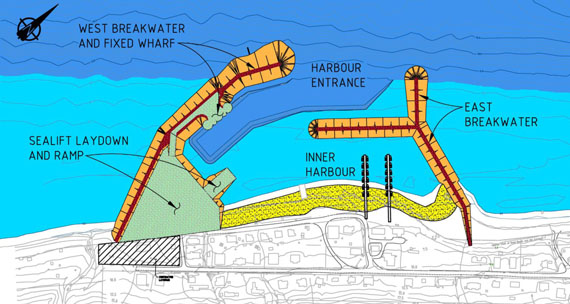 Pond Inlet’s small craft harbour will include a fixed wharf along with a deep-water entrance to accommodate barges for sealift in the summer and an inner harbour for small boats. (IMAGE FROM GOVERNMENT OF NUNAVUT)

The new small craft harbour in Pond Inlet, slated for completion by the end of 2019, promises to add a third piece of marine infrastructure on Baffin Island that will take on sealift cargo operations in the summer and give boaters easier access to the sea.

The Pond Inlet marine infrastructure project got underway after the Government of Nunavut approved funding contribution for the $41.2 million project in March 2016, promising to contribute $11.2 million on top of the $30 million from the federal government, Nunavut’s Department of Community and Government Services told Nunatsiaq News.

Pond Inlet’s new facility will include a deep harbour entrance for direct access to the sea at low tide, enclosed by a set of breakwaters.

A large fixed wharf, sealift ramp and laydown area will take on cargo from sealift barges. As is now the case, marine cargo vessels will anchor outside of the harbour and use barges to bring cargo into the harbour to be landed at the ramp for unloading.

The laydown area will also accommodate parking and boat storage. An inner harbour will include floats for smaller boats.

Pond Inlet’s small craft harbour is part of a set of marine infrastructure projects which the CGS started last year, under similar timelines.

The other is a two-part project in Iqaluit, which includes the construction of a deep-sea port and improvements to the capital city’s small craft harbour.

A multinational consulting firm, Advisian, is carrying out engineering work on all the projects.

Pangnirtung is the only other community in the region with a harbour that can take on cargo during the sealift supply season in the summer.

The CGS shared its plans for Pond Inlet’s new marine infrastructure with the community of about 1,600 residents at an open house event Feb. 27, and the department is now considering their feedback in the design options.

The project’s priorities are to improve waterfront safety and access “with easier boat-launching and dedicated sealift areas,” Mullaly said in an email.

“We expect this project will support economic opportunities that will benefit (Pond Inlet) in the long run.”

The government expects to award the contract for construction in March 2018. Building will begin that summer, and continue to completion by the end of fall 2019.