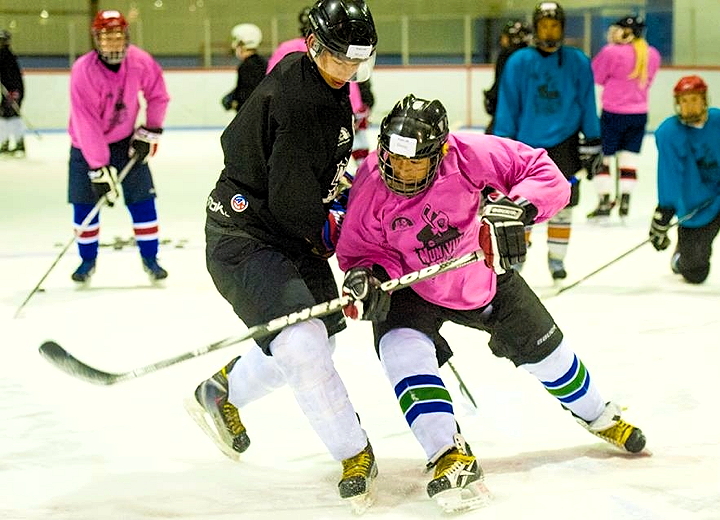 Hang up your skates, kids. The Nunavut Stars Hockey camp has been cancelled for 2015. Director Jesse Mike said the camp can’t go forward because of a last-minute agreement change from First Air which no longer offered free flights to youth and volunteers to come to Iqaluit for the camp. (FILE PHOTO COURTESY OF NUNAVUT STARS HOCKEY CAMP)

The popular Nunavut Stars summer hockey camp has been cancelled for this year.

The free Iqaluit-based camp, held annually in August since 2002, hosted 120 kids from ages five to 18 last year. Celebrity coaches such as Brad May, Mike Keenan and Gillian Apps have contributed to the camp in years past.

But camp director Jesse Mike said June 25 that she had to cancel it this year because an agreement with First Air fell through.

“Our contract with First Air was up this year and they did offer us, very recently, a new agreement and we don’t have enough time to be able to fundraise to run the camp,” Mike said.

The new agreement didn’t include free flights to Iqaluit for coaches from the South, nor for flights for players from around the territory, as it had in years past.

“The agreement before, they would give us a lot of passes for the volunteers coming south and some of the Nunavut communities. That would cost us nothing,” Mike said.

“And as well they would fly kids from each community here for no cost.”

Their three-year agreement expired in June. First Air only notified Mike of the changes in late May, she said.

“But we did approach the other airlines to try and see if they would be able to and they weren’t, so that’s when, yesterday, we made the final decision,” she said.

We called First Air for comment but they did not respond by Nunatsiaq News’ publication time.

Because changes to the First Air offer contract came so late, camp organizers didn’t have time to raise money for the airfares, Mike said.

“If we would have known months ahead of time we could have been able to figure out what kind of budget we needed and tried to approach as many community members and organizations and corporations to make sure we have everything that we need,” she said.

Usually the budget for the camp is just under $30,000 per year. But Mike estimated it would have cost triple that if flights had to be paid for as well.

“When you’re asking for money from organizations they need to know: how much are you going to need? And we didn’t know that. So you can’t fill out proposals without an idea of how much you’re going to need.”

Mike said there’s a little bit of money left from last year’s Indiegogo fundraising campaign, but that will be put towards the 2016 camp now.

So why not just hold the camp in Iqaluit and let kids and parents pay for the camp themselves?

That defeats the purpose of the camp, Mike said.

“We secure a lot of funding as Nunavut-wide,” she said.

“I don’t want it to benefit just kids from Iqaluit. Iqaluit kids get enough as it is and it’s important for it be available to everyone equally because it’s at no cost.”

About a quarter of the hockey players who participate fly in from various Nunavut communities for the camp.

“We want to always keep it an opportunity equal for everyone, doesn’t matter where in Nunavut you come from and whether or not your family can fly you here.”

Mike hesitated to place the blame on First Air, however. She said the camp just needed more time to raise the money.

“Everybody knows the airlines are going through a lot of changes and I think that a lot of it is effecting these great organizations,” Mike said.

Mike said she hopes they can come to an agreement with First Air in the future.

“I’m going to continue working with them to see if we can come up with an agreement that is a little bit better for both of us,” Mike said.

Mike said First Air has worked with the camp since 2001, before it was even launched, and she wants to continue that relationship.

“We appreciate that they’re willing to give us anything, but at the same time there’s just so much we can do to make it work with the time frame we have.”

Having said all that, Mike is nonetheless disappointed that the camp won’t happen this year.

“A lot of families will base their vacation around this camp because a lot of kids prefer to come to this camp than be away on holidays.

“I’m disappointed more for this kids and the families,” Mike said. “But now we have an entire year to plan for the next camp.”

You can still contribute to the Nunavut Stars hockey camp here.