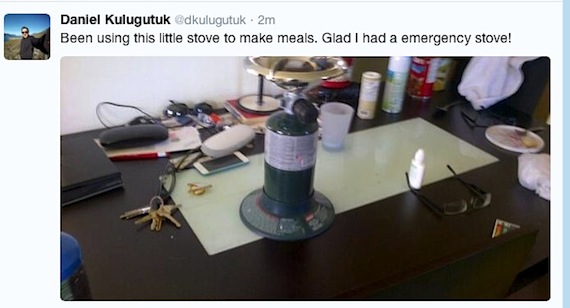 With the return of limited power in Pangnirtung, Daniel Kulugutuk was among those who were able to post on Twitter early Friday, April 3, about their community’s ongoing power crisis. 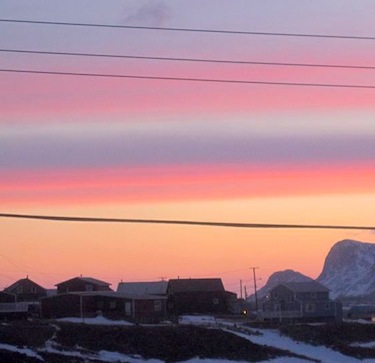 People in Pangnirtung woke up April 2 to a community-wide power outage which some residents said resulted from a fire in the 40-year-old diesel power plant. (PHOTO COURTESY OF MADELEINE QUMUATUQ) 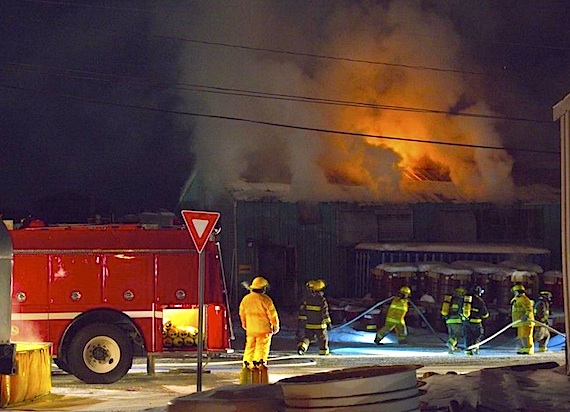 Firefighters in Pangnirtung battle the early morning April 2 blaze which knocked out power to the community. (PHOTO BY DAVID KILABUK)

Partial electrical power has been restored to Pangnirtung and Nunavut’s Office of the Fire Marshal plans to conduct inspections at the damaged local power plant to determine the source of a fire that knocked out power to the community of about 1,500 people on April 2, the Government of Nunavut said April 3.

At the same time, Northwestel has sent a generator and staff to the community, where long-distance phone service and internet began to falter after backup batteries at the telecom’s earth station began to run down.

The company said local telephone calling should continue to work where power is available or not required to operate phones.

Electricity was rotated for two, and then four-hour intervals, the Qulliq Energy Corp. later said — a pattern that continued into April 3.

And people in Pangnirtung have told Nunatsiaq News they are hearing it may take months for full power to be restored to the community.

The Hamlet of Pangnirtung declared a local state of emergency on the morning of April 2 and Nunavut Emergency Management brought in smaller stand-alone generators and flew mechanical staff to Pangnirtung on April 2 to set them up.

The GN said the fire at the power plant in Pangnirtung began at about 1:30 a.m. on April 2.

But fire crews had extinguished the fire at the plant by early morning, the Emergency Management office said, although the generator’s loss knocked out all power to the community.

A warming shelter was opened at the Attagoyuk Ilisavik School with cots, mattresses and blankets supplied by the 795 Iqaluit Squadron of the Royal Canadian Air Cadets.

Health centre staff evaluated residents with vulnerable health conditions to determine if they needed to be evacuated to Iqaluit to ensure their continued care, the Emergency Management office said.

And local Canadian Rangers also went door-to-door to identify residents in need of help, and to remind them of safety precautions they should take at home.

People using portable heating equipment were reminded to properly ventilate their homes to prevent carbon monoxide poisoning — and never to use outdoor barbecues inside.

Homeowners were advised to open their taps periodically to prevent pressure build-up in the lines or frozen pipes.

The Emergency Management office asked everyone to conserve power and water.

“We understand the impacts of being without power in Canada’s North and are pleased to be able to assist our neighbouring utility,” said Emanuel DaRosa, the power corporation’s president and CEO.

“It’s the least we can do in this crisis situation where 1,500 people are without primary power,” he said.

Pangnirtung’s main diesel-fueled generator, which has a capacity of 2.22 megawatts, dates back to 1971.

Upgrades to aging power plants recently topped a list of Baffin mayors’ concerns in an open discussion with Nunavut Finance Minister Keith Peterson at a regional forum in Iqaluit, March 19.

Speaking as minister responsible for the QEC, Peterson said the government is set to finance upgrades to 17 power plants in hamlets throughout Nunavut.

“We have many power plants that are aging, and reaching end of life in the communities,” he said during the Baffin Mayors’ Forum. “We need a major infusion of funding to upgrade the power plants.”

The government wants to pay for upgrades by borrowing $200 million in the upcoming fiscal year, Peterson said. It’s part of a $750 million debt cap the Government of Nunavut hopes to secure from the federal government.

The current state of emergency in Pangnirtung is not the hamlet’s first experience with an emergency situation.

In June 2008, a mix of above average temperatures, heavy rains and a torrent of melt-water sent Pangnirtung into a state of emergency for three weeks — that’s when the Duval River carved out a new course and washed away the earth that supported two bridges connecting the town with its water supply, sewage treatment plant and some homes.