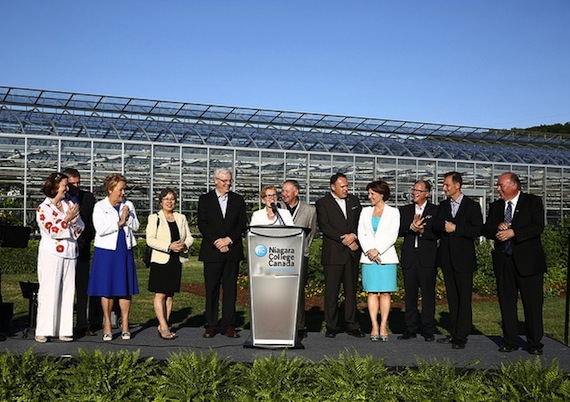 Premiers, including Nunavut Premier Eva Aariak (fourth from left), pose under sunny skies at Niagara-on-the-Lake, Ont., where the Council of the Federation, which comprises all provincial and territorial premiers, met July 24 to July 26. (HANDOUT PHOTO)

After a July 24 opening reception that included samples of “Canada’s Premier Beer” — brewed with ingredients from every province and territory in Canada (including fresh qunguliq or mountain sorrel from Nunavut) — premiers at the annual Council of the Federation meeting in Niagara-on-the-Lake, Ont. got down to business last week.

In a July 26 news release they said that “every province and territory must be able to provide its citizens with reasonably comparable levels of public services with reasonably comparable levels of taxation; that no jurisdiction should be made worse off; and that Canada’s fiscal arrangements should be a win-win for all Canadians regardless of where they live.”

Disaster mitigation, following the recent rail disaster in Quebec, also topped the other subjects discussed at the council meeting.

Premiers called on the federal government to fufill its 2011 commitment to establish a distinct Canada-wide disaster mitigation infrastructure program that would be cost-shared 50-50 with Ottawa and to maintain the current Disaster Financial Assistance program for provinces and territories.

They also called for improved search and rescue response times and a thorough review of marine safety.

At the meeting, premiers released a progress report from the Council of the Federation Working Group on the Canadian Energy Strategy.

The progress report identifies the vision and principles for the Canadian Energy Strategy, highlights work done by provinces and territories since the 2007 Council of the Federation Strategy “A Shared Vision for Energy in Canada,” and identifies challenges and opportunities facing Canada’s energy sector.

“As owners of natural resources, provinces and territories have an essential role to play in developing Canada as a global leader in energy development, knowledge and technology. This essential role includes ensuring that energy development takes place in an environmentally and socially sustainable manner that includes conservation and efficiency and supports the transition to a lower carbon economy,” a closing news release from the council noted.

The premiers also agreed that the Canadian Energy Strategy should address ways to improve access to affordable, clean, renewable and reliable supplies of energy in Aboriginal and remote communities.