This map shows the location of Sabina Gold and Silver Corp.’s Back River mine, known as Hannigayok in Inuinnaqtun, along with western Nunavut communities. (IMAGE COURTESY OF SABINA) 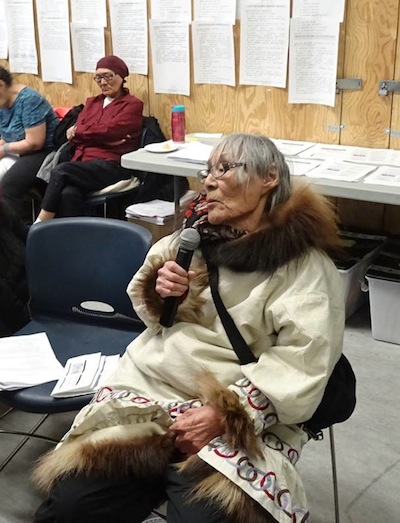 Elder Amy Kamoayok makes a comment April 27 at the NIRB’s final hearing on the Back River gold mine project. Caribou are our history, Kamoayok, who was born near Bathurst Inlet, told the hearing. Kamoayok, with her family, would walk and hunt inland where Sabina wants to build four-mine, underground and open-pit complex. Speaking in Inuinnaqtun, Kamoayok also recalled the words of her late grandfather who had a vision of a meeting where people would discuss the future of the area where they would see thousands of caribou from the now-dwindling Bathurst caribou herd pass by. (PHOTO BY JANE GEORGE)

That was the shared message from the governments of Nunavut and the Northwest Territories on day three of the Nunavut Impact Review Board’s final hearing into the Back River gold project in Cambridge Bay.

“The GN is able to support the project if its concerns are appropriate addressed,” said Lou Kamermans, manager, environmental assessment and regulation at the Government of Nunavut.

The western Nunavut project needs to revamp its wildlife monitoring and migration plans for the Bathurst and Beverly caribou herds, as well as for grizzly bears, polar bears, muskoxen, wolverine and raptors, he said.

Sabina is too focused on the mine project’s seasonal and limited interactions with the Bathurst caribou herd while ignoring the project’s “extensive summer interaction with the Beverly herd.”

The GN also criticized Sabina’s plans to not close down operations completely if caribou approach the mine site and for planning to undertake construction in July and August when Beverly caribou are migrating through the area.

But that mine construction schedule can’t change, Matthew Pickard, Sabina’s vice president for the environment and sustainability, said in his April 27 response to the GN.

Sabina plans to build open pit and underground mines at its Goose property, located 400 kilometres south of Cambridge Bay and 520 km north of Yellowknife, which will operate for at least 10 years.

To support its operations at Back River, Sabina proposes, among other things, to build a 157-km winter road from the Goose site to a marine laydown area at Bathurst Inlet.

Stopping construction due to the presence of caribou in the vicinity won’t happen, Pickard said.

That’s because it wouldn’t be safe for workers to build large structures in colder months. Not working in July and August would, moreover add a year to the four-year construction period and $100 million to the $700-million price tag for the project, he said.

The GNWT, in its April 27 presentation, also picked up the call for more quick action to protect barren-ground caribou.

During the hearing, Sabina has said that it might take up to a year for the mining activities to adjust to any changes in the ranges of the herds that roam between Nunavut and the NWT.

But the GNWT said an immediate staged shut-down and other actions should be triggered when caribou, especially caribou cows or cows with calves, approach within four kilometres of the mine site.

The GNWT presentation cited the latest dramatic downturn in the numbers of Bathurst caribou, whose numbers have decreased by 96 per cent since 1986 — and from 35,000 to only 20,000 in the past three years.

During its presentation, the Department of Fisheries and Oceans also mentioned several other wildlife concerns with respect to fish, which may be killed, harmed or lose their stream and lake habitats through blasting, road construction and other mining activities.

The DFO is also worried that ringed seals and marine mammals in Bathurst Inlet may be affected by future shipping and the construction of Sabina’s mini-port facility there.

Environment and Climate Change Canada said it “was generally satisfied with the commitments made by the proponent.”

But the federal department noted its concern about the incidental take of migratory birds and about the project’s impact on the nine species of risk found in and around the mine. These include including the Dolphin and Union caribou, peregrine falcons, grizzly bears, wolverines, polar bears and red-necked phalarope shore birds.

The Kitikmeot Inuit Association still has more than 20 unresolved issues with Sabina, its presentation showed. These include information on how Sabina will undertake any staged reduction in activities, among other changes to the company’s wildlife mitigation and monitoring programs.

The KIA and Sabina must also negotiate a slew of deals, including an Inuit Impact Benefits Agreement and a land-use agreement.

But the KIA sounded optimistic, with KIA President Stanley Anablak saying how the “KIA and Sabina have a positive working relationship.”

The hearing continues April 28 to April 30 with a community roundtable.