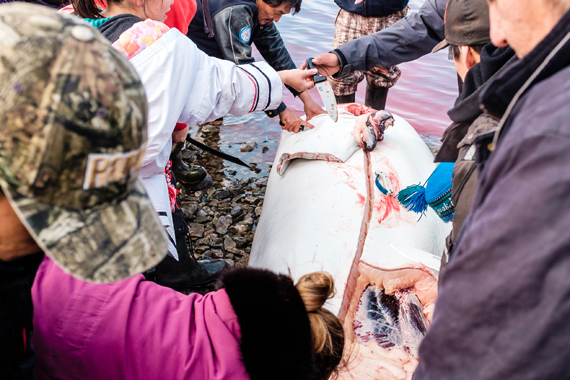 Inukjuak hunters butcher a beluga whale outside the Hudson coast community last fall. With warm temperatures reported along Nunavik’s Hudson coast this summer, health officials are warning harvesters to put their catch on ice or in coolers right away to prevent harmful bacteria from growing. (FILE PHOTO)

Nunavik health officials have confirmed that beluga meat consumed in Inukjuak earlier this month was infected with the bacteria that causes botulism.

Botulism is believed to have killed an Inukjuak woman in her fifties on July 8 and infected the woman’s daughter, who was treated in Montreal hospital and later released.

Botulism is a rare but serious illness caused by a toxin that affects the nervous system and can cause paralysis and in serious cases, death.

“We had a call from the health centre that morning, and the doctor on call had spoken to family members to understand what had happened,” said Dr. Marie Rochette, coordinator of infectious disease prevention at Nunavik’s public health department.

Health care workers identified beluga meat, which was sent to Ottawa for testing and came back positive for Clostridium botulinum, the bacterium that causes botulism. Officials are still waiting on the results of two other samples of beluga meat.

The health centre in Inukjuak reported treating other patients with symptoms of botulism, although it remains unclear if those patients ate the same beluga meat and no other cases were confirmed.

The meat in question came from belugas hunted near Umiujaq at the end of June, Rochette said, when temperatures along the Hudson Bay coast rose as high as 28C.

“Warm temperatures can be the cause of the bacteria,” Rochette said.

Public health issued a warning to Inukjuamiut and anyone else who had beluga meat, fat or oil from that harvest to throw out the products.

The infected meat appeared to be limited to the whale’s inside flesh, however; a number of people ate maqtaq and didn’t fall ill, Rochette said.

Despite the tragic death of the Inukjuak woman, cases of botulism remain rare in the region.

Over the last decade, Nunavik has seen anywhere between zero and three cases of foodborne botulism a year, with no other recent deaths.

“But with warming temperatures, these are conditions for the bacteria to grow,” Rochette said. “That’s why we are warning hunters to be very careful to put [harvested] meat on ice or in a cooler right away.”

Symptoms of botulism can include:

• dryness in the mouth, throat and nose and difficulty in swallowing and speaking;

• paralysis that starts in the shoulders and arms and moves down the body.

Symptoms of foodborne botulism generally begin 12 to 36 hours after consuming contaminated food; however, but onset can begin as soon as six hours after exposure or as long as 10 days later.

Rochette urges any Nunavimmiut who experiences those symptoms to go to their local health centre immediately.