Put babies to sleep on their backs: Nunavut government

SIDS remains leading cause of infant death in Nunavut 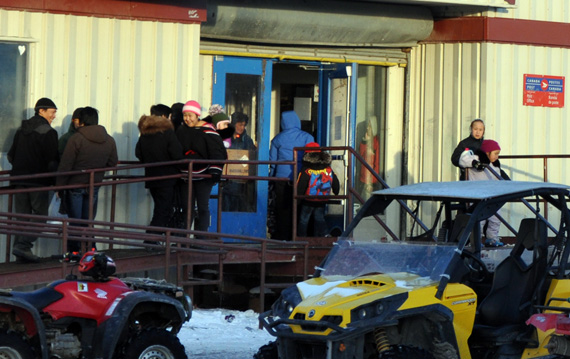 Health officials in Nunavut are encouraging parents and caregivers to ensure that infants have a safe place to sleep. (FILE PHOTO)

Nunavut’s Office of the Chief Coroner is encouraging parents and caregivers to ensure that infants have a safe place to sleep.

That means putting babies to sleep on their back in a protected sleeping area, free of toys and other loose materials.

Following a 2012 joint review of infant deaths in the territory, unsafe sleep practices were found to increase the risk of Sudden Infant Death Syndrome (SIDS), the leading cause of infant death in Nunavut.

More recently, chief coroner Padma Suramala said her office investigated an infant death in Pond Inlet, the cause of which was confirmed as SIDS.

Suramala noted that unsafe sleeping patterns and bed-sharing were found to be risk factors in that case.

A study called Cause and risk factors for infant mortality in Nunavut, prepared by the Government of Nunavut’s health and justice departments, Nunavut Tunngavik Inc. and researchers at the University of Manitoba and the University of British Columbia, looked at 117 cases of Nunavummiut infant deaths between 1999 and 2011.

SIDS was found to be the leading cause of infant death at 48 per cent, followed by infection at 21 per cent.

And the study determined that factors such as sleep position and bed-sharing may play a role in these deaths.

Details on the infants’ sleep environments were available in 52 of the 56 confirmed cases of SIDs that researchers reviewed.

In 33 of those cases, the infant was found to be sharing a bed with another person.

Of those cases, 23 had two or more additional risk factors, including sleeping in a position other than on the back, sleeping on a surface that was too soft or cluttered with other material, sleeping with a non-caregiver or sleeping with someone who was under the influence of drugs or alcohol.

Infection — mainly respiratory — was the cause of death in 25 cases reviewed in the study.

That’s why health officials in Nunavut are now stressing the need for a safe sleeping environment for Nunavummiut babies.

That means putting infants to sleep on their back in a protected area free of clutter.

A GN safety bulletin stresses that car seats or infant carriers should not be used as a sleeping area.

Sharing a bed with an infant “if the parent is extremely tired, sedated with prescription or non-prescription medications or under the influence of drugs or alcohol can increase the risk of death for babies less than one year of age,” the bulletin reads.

And if there is bed-sharing, it should only be with a primary caregiver and never with a non-caregiver or with other children.

Babies should always be in a smoke-free environment, the bulletin notes, as babies who are exposed to cigarette smoke during pregnancy and who live in homes with smokers are at increased risk of SIDS.

High rates of infant mortality are not new or specific to Nunavut. A 2010 study showed that Inuit infants die at a rate three times higher than babies in the rest of the country – with Nunavik seeing the highest rates.

But the Nunavut-focused report on risk factors for infant mortality calls for improved pre- and post-natal data collection to better understand the high rates seen across the territory.

A surveillance system that gathers health information about Nunavut mothers and babies, called Nutaqqavut “Our Children,” started collecting data in 2012.

An estimated 850 infants are born in Nunavut each year, with between 90 and 95 per cent of those born to Inuit women.