QIA to push hard for Inuit employment at Mary River

Inuit job levels at the north Baffin iron mine falls to 12.5 per cent 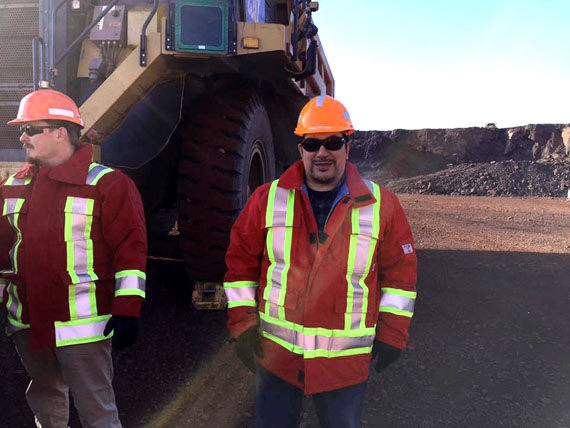 QIA’s Arctic Bay community director Levi Barnabas (right) and QIA President PJ Akeeagok (left) on a site visit to the Mary River iron mine at the end of April. (PHOTO COURTESY OF QIA) 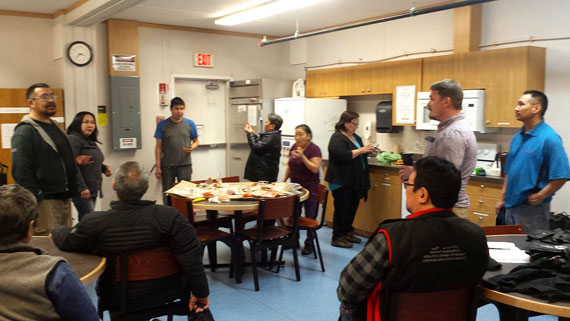 Representatives from the Qikiqtani Inuit Association meet with Inuit workers at the Mary River iron mine late last month. (PHOTO COURTESY OF QIA)

With Inuit employment at the Mary River iron mine dropping to just 100 people, or 12.5 per cent of the workforce, the Qikiqtani Inuit Association’s big priority this year is to work with Baffinland Iron Mines Corp. on Inuit training and recruitment, Levi Barnabas, the QIA community director for Arctic Bay, told Nunatsiaq News in an interview last week.

That 12.5 per cent number represents a big drop from the level of Inuit employment reported for 2014—20.3 per cent—and well down from the 16.7 per cent level reported for the period between January and June 2016.

It’s also a long way from the minimum Inuit employment target that the QIA and Baffinland agreed to for 2016, a target that was then carried over to 2017: 25 per cent.

“QIA wants to see those numbers increase. We already know there are people looking for jobs. Why are they not hired? That is a big question,” Barnabas said.

Barnabas, also the chair of the committee that oversees QIA’s Inuit Impact and Benefit Agreement with Baffinland, visited the Mary River mine site, along with QIA President PJ Akeeagok and other officials, during the last week of April.

There, he and the other QIA reps met with Baffinland’s CEO, Brian Penney, and spent time listening to Inuit workers talk about their on-the-job experiences.

Right now, there doesn’t appear to be any single reason to explain the precipitous drop in Inuit employment at Mary River, but rather a combination of factors.

One is the fly-in-fly-out pattern of work.

“Some people are not used to being two weeks in, two weeks out, missing their family and so on,” Barnabas said.

Another is the call of the land in the spring, when many Inuit yearn to go hunting and camping.

“If spring comes and they’re not approved for their vacation, they quit. You can’t change things like that,” Barnabas said.

Yet another appears to be an overly complex system for processing job applications.

“One of the people said there’s too much red tape in the applications and that we need to improve that. People are struggling to apply to Mary River because of too much red tape,” Barnabas said.

Another factor is that some Inuit at Mary River are employed not by Baffinland but by contractors. And when the contractor loses a contract with Baffinland, the Inuit workers lose their jobs, Barnabas said.

But Barnabas said conflicts related to language and culture are not a big problem at Mary River anymore—because Inuit workers appear to accept the need to use English.

As for workplace safety, Barnabas said he believes that the state of worker safety has improved since the accidental death of a 51-year-old Arctic Bay man in September 2015.

On that front, one new measure is the use of a tracking device attached to each worker’s heel.

“If you fall down and slip somewhere, they know right away that something happened. So there’s been a lot of improvement in the safety area,” Barnabas said.

However, one big task that the QIA and Baffinland must complete is a joint human resources strategy for Mary River.

The creation of such a strategy, a requirement of their IIBA, is a job they’ve been working on since 2014.

And the QIA’s priority is to get it finished in 2017. When it’s done, it will establish Inuit employment targets and set out ways to achieve them, including training and career preparation.

“The IIBA requires that QIA and Baffinland develop effective training for employment at all stages of the project. So we’re trying to get them into training not just to be heavy equipment operators, we want to get them into management,” Barnabas said.

He also said Baffinland is willing to aim higher than a target of only 25 percent.

“When we talked to the management, they said they want to achieve more than 25 per cent within a few years. Hopefully, if things work out well, hopefully we’ll reach 30 to 40 per cent,” Barnabas said.

The QIA wants Inuit, including youth and women, to aspire to jobs at all levels within the Mary River workplace.

“The Inuit human resource strategy is to describe how Inuit are treated, hired, and addressed in employment at the Mary River project, with a focus on Inuit women and youth. That’s one of our goals.”

The QIA also wants to target high school graduates to find out what kinds of careers they’re thinking about. For those who want a career in mining, “let’s get rolling,” Barnabas said.

One way to attract more Inuit is to reach out beyond the five High Arctic communities and Iqaluit, whose residents enjoy the benefit of a preferential hiring policy, to the rest of the Baffin region and all of Nunavut.

As for Baffinland, the company has committed to hiring an additional 50 Inuit for permanent positions this year, Barnabas said.

And during their recent visit, the QIA’s representatives observed the last of two new ore trucks that Baffinland decided to fly to Mary River to transport ore from the mine site to Milne Inlet.

“The new ore trucks will help the company meet their target of 4.2 million tonnes of iron ore for 2017,” Barnabas said.

Also on May 9 and May 10 this week, QIA will will hold a project review forum in Arctic Bay to hear from people in affected communities about the impact of the mine.