Quebec backtracks, will let parents fly with children on medevacs

“It’s a part of living up North, but we have to be human” 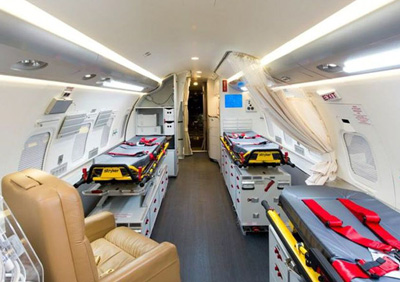 The government of Quebec has promised to look at how to reconfigure the province’s air ambulance, set up inside a Challenger jet, to accommodate parents who want to accompany their children south for treatment. (PHOTO COURTESY OF GOV. OF QUEBEC)

The Quebec government has agreed to revisit a policy that currently prevents parents from accompanying their sick or injured children aboard the province’s air ambulance.

Quebec Health Minister Gaétan Barrette told reporters outside Quebec’s National Assembly on Tuesday, Feb. 6 that his department is working on an arrangement that would allow at least one parent to board the air ambulance.

That would require a reconfiguration of the Challenger jet that currently houses the mobile ambulance, he said.

“It’s a complex issue and we’re looking to find a solution,” said Jean Boucher, the Liberal MNA for Ungava, which includes Nunavik. “[The service] is a part of living up North, but we have to be human.”

Boucher, who lived in Kuujjuaq prior to being elected MNA, once was a patient on the air ambulance himself, he said.

But he wasn’t aware at the time that even underage patients must fly alone to Montreal, while their parents or caregivers can only join them by commercial flight.

The issue made headlines last month after a group of Montreal pediatricians wrote an open letter to the province’s air ambulance agency, Évacuations aéromédicales du Québec, or ÉVAQ, flagging serious concerns with the policy and asking for change.

The doctors noted that Nunavik Inuit are “particularly impacted” by the policy, recounting incidents where young Inuktitut-speaking patients were unable to communicate with health care staff or tried to flee the hospital.

“Our colleagues have, on a number of occasions, reported a feeling of helplessness and indignation when seeing a child alone, crying so inconsolably, simply out of fear or pain, and not have a parent to comfort them,” said the December letter.

Boucher acknowledged that there are very real barriers currently keeping parents off those flights: the ambulance is not configured to hold extra passengers, while the ambulance itself can be a sterile environment.

When the letter was first made public, the province’s health officials said that while they understood the concerns of families, they were unable to change the setup of the Challenger jets that house the ambulance service.

But two weeks later, public pressure had forced the Barrette’s hand and he has promised to visit an air ambulance in person to see what reconfiguration is possible.

Boucher said it’s difficult for parents in a southern setting to even imagine the scenario of a sick child travelling on their own, when most are accustomed to being with their children through the entire health care process.

“For now, they’re looking at solutions. I hope to see some kind of change in a couple of weeks.”

Nunatsiaq News has been unable to speak to anyone at the Nunavik Regional Board of Health and Social Services.

But the health board released a statement Feb. 6, saying its officials had begun a discussion with the province in 2017 on how to improve emergency medical travel from the region.

“Its services are … of crucial importance for our region, but they would be greatly improved if parents were allowed to escort their child on board such flights,” the health board said.

“It is possible to offer medical evacuations that are clinically and culturally safe while ensuring the primacy of access to health services for the entire population of Québec.”