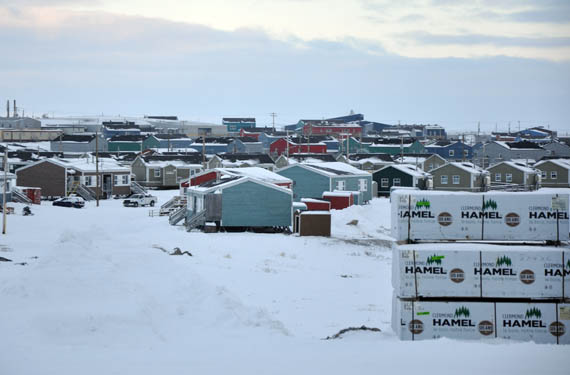 Quebec has allocated over $20 million to the development of a private housing market in Nunavik, where currently just three per cent of the population owns their own home. (PHOTO BY SARAH ROGERS)

The Quebec government’s 2018-2019 budget has set aside money to support the region’s social and private housing markets, along with funding to build the region’s new addictions treatment centre.

The Quebec budget, released on Tuesday, March 27 in Quebec City, allocated $44 million to “housing assistance” in the region.

About half of that—$22.1 million—will go to replace aging Kativik Municipal Housing Bureau warehouses, which are used to store equipment to renovate social housing units.

Many of those warehouses have been around for almost 40 years. The new funding will allow the KMHB to build three new warehouses, although it doesn’t specify in which communities.

With the remainder of that $44 million, Quebec said it hopes to foster the development of a private housing market—virtually non-existent in a region where just three per cent of the population owns their own home.

The KMBH already runs a home ownership and renovation program, which offers up to 75 per cent of the cost of constructing a home.

The budget is investing $15.9 million into the program over the next five years to help Nunavimmiut with the purchase and construction of 45 private housing units.

But Nunavik’s home ownership program hasn’t taken off like the government planned, in large part because those same subsidies aren’t available to buyers who wish to purchase an existing home.

So Quebec’s 2018 budget also establishes a $5 million buy-back fund, to be managed by the KMHB’s parent agency, the Société d’habitation du Québec. The fund is intended to help first-time home buyers obtain loans through financial institutions.

The SHQ will also oversee a new $1 million pilot project in 2018-2019 to help Nunavik tenants to buy the home they are renting.

Quebec’s 2018-2019 budget also handed out $10 million to the construction of the new Isuarsivik Regional Recovery Centre.

The Kuujjuaq-based addictions centre currently offers a six-week treatment cycle for up to nine clients.

But Isuarsivik’s board of directors plan to replace the 70-year-old building with a new, expanded facility that will accommodate 20 clients at the time, as well as their family members.

The new $32-million Isuarsivik centre hopes to employ 42 staff members, including an on-site psychologist, nurse and family therapists, once it opens in 2020.

The government’s support includes $8.5 million for the centre itself and 12 adjacent housing units to help attract and retain specialized employees.

Another $1.5 million from the Fonds du Plan Nord is earmarked to coordinate the fund pre-construction studies.

“We hope this announcement will enable [us] to speed up the process within the federal government,” Isuarsivik said in a March 29 release.

“We are eager to hear back from Indigenous Services Department on how our project can benefit from the $200 million announced in the federal budget to prevent and treat addictions within indigenous communities.”

• $13 million to extend the region’s cost-of-living subsidies for one year, while the region continues to negotiate a longer-term funding agreement with the province

• $95.8 million to fight domestic and sexual violence across the province, $14.4 million of which will be focused in Indigenous communities.