“The situation of the Leaf River caribou herd is worrying” 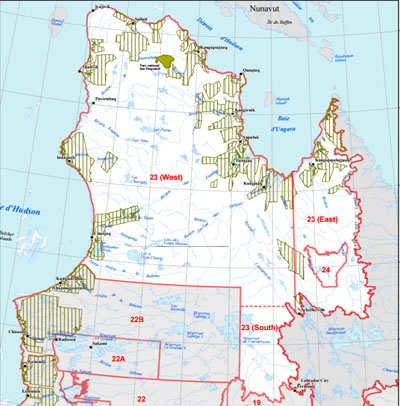 A map of Quebec’s sports hunting zones. Nunavik is made up largely of zone 23 and a portion of zone 22, where the province will maintain the sports hunt of the vulnerable Leaf River caribou until February 2018, Quebec announced in December. (PHOTO COURTESY OF QUEBEC GOVERNEMENT)

The Quebec government said it will close the sport hunt of the province’s migratory caribou to help those species’ declining populations rebound—but not until 2018.

A new survey of Quebec’s Leaf River herd, conducted this past summer by government biologists, estimated the population at 199,000, down from 430,000 caribou in 2011.

Those numbers are “worrying,” said Luc Blanchette, Quebec minister of forests, wildlife and parks, in a Dec. 21 release.

“Our government therefore has the responsibility to apply management measures that will foster the sustainability of a species of considerable importance to northern ecosystems and Aboriginal communities in Quebec,” Blanchette said.

The closure goes into effect Feb. 1, 2018, for an “indefinite period,” Blanchette’s department said.

But a delayed closure will do little to allay the concerns of Nunavik Inuit, who have called for an immediate ban of the sports hunt.

In mid-December, the province presented the results of its new survey to members of the Hunting Fishing and Trapping Coordinating Committee, the body that oversees harvesting rights under the James Bay and Northern Quebec Agreement.

Delisle Alaku said that despite repeated calls for a closure, the province took more than three years to close the sports hunt for the George River herd, Quebec’s other migratory caribou species.

Quebec closed the sports hunt of that herd in 2012.

“We do not want history repeating itself and a lack of decision on the part of government causing the Leaf River herd to crash the way of the George River herd,” Delisle Alaku told Nunatsiaq News in December.

Next, the province says it will set up an inter-departmental committee to look at the decline in northern Quebec’s migratory caribou population in consultation with “the partners likely to be affected by future decisions,” said the Dec. 21 release.

Quebec’s department of forests, wildlife and parks also tasks the Cree, Inuit and Naskapi with monitoring their own harvest.

According to Quebec’s most recent statistics, sports hunters took 987 caribou in the 2014-15 fall and winter hunt.

Makivik does not track statistics of the subsistence hunt of caribou in the region. But the organization said it would consider imposing quotas on the hunt if the Leaf River herd’s numbers continue to drop.

In the meantime, certain areas will remain closed for the fall and winter sports hunt of 2017-2018 which typically runs from August to early October and from December through January, respectively.

Quebec’s sports hunt is regulated by zones of which there are 23 throughout Quebec (see image). Nunavik is made up largely of zone 23, and a portion of zone 22.

Parts of zone 22 remain closed to the sports hunt for 2017-2018. In the rest of the zone, Quebec has issued 617 licenses to hunters who can each purchase a maximum of two licenses (each license allows them to hunt one caribou).

Hunters are prohibited from killing caribou with no antlers or antlers that measure less than 15 centimetres.

In zone 23, which covers the vast majority of Nunavik, the province has issued 749 licences for the 2017 fall sports hunt. Quebec has not yet issued licenses for the 2017-2018 winter hunt.