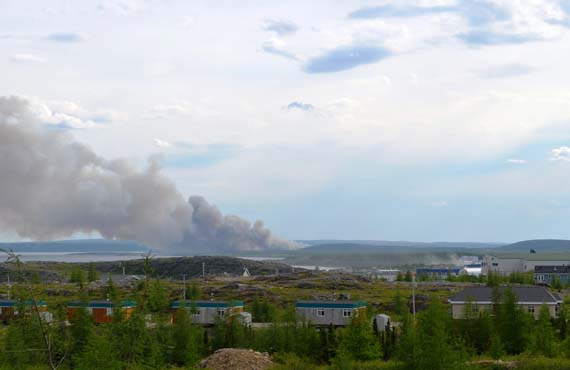 A June 22 fire outside of Kuujjuaq quickly spread, sending black smoke over the community of 2,200. (PHOTO BY ERIC DUCHESNEAU)

Fire specialists from southern Quebec arrived in Kuujjuaq June 26 to help extinguish what’s left of a forest fire that burned just outside the Nunavik community earlier this week.

On June 22, a fire began in a neighbourhood called the Range, a few kilometres southwest of the Nunavik community, where a number of local residents own cabins.

Fire trucks were unable to reach the blaze, but heavy equipment operators dug a trench around the area that contained the fire overnight.

That will help prevent any new fires from flaring up. SOPFEU is expected to remain on site until the area is secured.

Municipal officials are still looking into what might have caused the fire.

Although forest fires a common occurrence in more southern regions, Kuujjuaq is one of the few communities in Nunavik where trees grow. The region has seen little rain and hotter than average temperatures through June.

For that reason, a fire advisory remains in place for Kuujjuammiut, who are asked not to start any camp fires in or around the community.

The Kativik Regional Government advises that residents may see smoke coming from the area this week, but says that is normal because of the work being done on the site.