“We can look to the future in peace” Efforts to maintain the tradition of dog teams in Nunavik may benefit from the $3 million that Quebec will give Makivik Corp. to protect and promote the Inuit language and culture. (PHOTO BY SARAH ROGERS) 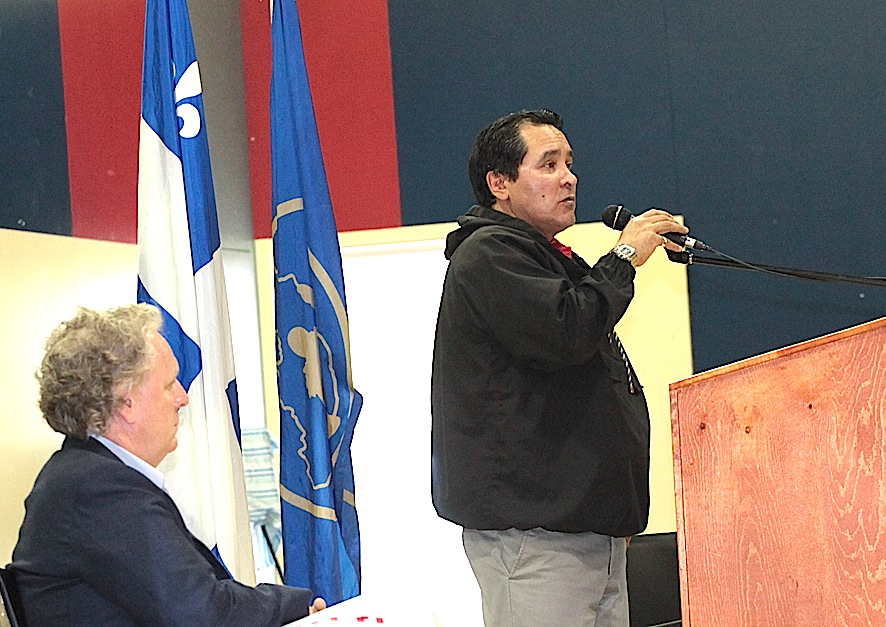 Quebec premier Jean Charest listens to Makivik Corp. president Pita Aatami on Aug. 8 in Kangiqsulajjuaq when Quebec announced it would give Makivik $3 million to acknowledge the slaughter of Inuit sled dogs in the 1950s and 60s. (PHOTO COURTESY OF MAKIVIK CORP.)

Nunavik’s Makivik Corp. and the province of Quebec signed an agreement Aug. 8 to recognize the dog slaughters that took place in Nunavik in 1950s and 1960s and their impact on the Inuit culture and way of life.

In acknowledging the slaughter of hundreds of Inuit sled dogs in the 1950s and 1960s, the agreement will provide $3 million to Makivik Corp. to protect and promote the Inuit language and culture as well as plaques for each of Nunavik’s 14 villages, commemorating the dog slaughter.

In a government of Quebec release, Aatami called the agreement “a satisfactory solution.”

“It demonstrates the government’s sincerity in it relationship with the Inuit,” Aatami said in the French-language release. “We can look to the future in peace.”

Quebec’s native affairs minister Geoff Kelley spoke of the province’s Plan Nord when he said the agreement highlighted a relationship of “respect” between the province and its northernmost region.

“We hope that this move strengthens the foundation for a future of promising opportunities for Quebec and Nunavik, ” Kelley said in the same release.

The agreement flows from a 2010 report by Jean-Jacques Croteau, a retired Quebec superior court judge, who was mandated by Quebec in 2007 to look into the issue.

The whole of Nunavik society suffered the damaging consequences of the actions, attitudes and mistakes of bureaucrats, agents and representatives of the federal and provincial governments who killed at least 1,000 dogs in Nunavik during the 1950s and 60s, concluded Croteau.

Agents, workers, bureaucrats, bearing responsibilities from the federal and provincial governments owe compensation and an apology to the Inuit of Nunavik, Croteau said in his report.

Croteau suggested the money should be divided up among non-profit Inuit corporations to pay for the promotion of Inuit art, culture and language as well to organize dog sled races, such as the annual Ivakkak race.

Croteau looked at all possible information regarding the sled dog killings, including the 2005 brief that Makivik submitted to Quebec and the federal government, personal testimonies from Inuit and non-Inuit, the RCMP’s final report from 2006, legislation regarding loose dogs, and the 2005 Makivik-produced video “Echo of the Last Howl,” which showed how the “burning pyramids of dogs” on the ice left an enduring legacy of pain and loss.

In the film, Aatami said the slaughter of Inuit dogs “reminded us of the wrongdoing to the Japanese” during World War II.

Then, Canadian residents and citizens of Japanese descent were declared “enemy aliens” and taken to internment camps for the duration of the war.

All of their property and belongings were sold, without the owners’ consent. Towards the end of the war, the Japanese were given the option for “dispersal” to places and towns east of the Rocky Mountains, or “repatriation” to Japan.

On Sept. 22, 1988, the Japanese Canadian Redress Agreement was signed, and in the House of Commons, then-prime minister Brian Mulroney acknowledged the government’s wrongful actions.

Last September, at the tabling of the final report of Quebec’s human rights commission, which looked at abuse towards children and youth in Nunavik, Aatami said the trauma of relocations, dog slaughters and residential schools were making themselves felt.

Nunavimmiut are paying a steep price for the past, he said.

“We’re going through a lot of pain,” he said.

Over the years, Makivik has lobbied for attention to the slaughter of sled dogs.

In 2005, Makivik submitted a brief called “The Slaughtering of Nunavik Qimmiit,” to the federal and provincial governments, suggesting snowmobiles, all-terrain vehicles and canoes should be legally regarded as tools instead of recreational vehicles by the government and be subject to lower taxes.

Gilles Duceppe, leader of the Bloc Québécois, said “we’ll always be beside you, supporting your fight” after a 2005 screening of “Echo of the Last Howl” in Kuujjuaq.

“It’s fundamental, from one day to the next they couldn’t go fishing. They couldn’t go hunting…imagine if someone took away all the means of transport from one day to the next in a city. Imagine if we took away camels from the Bedouin or the Tuoregs,” Duceppe said. “What would that do? It forces people to change their way of life, and those who were nomadic to become settled. That’s a major transformation in a society and no one worried about that at all.”