“With $185 million, Nunavik’s housing shortage could be solved” 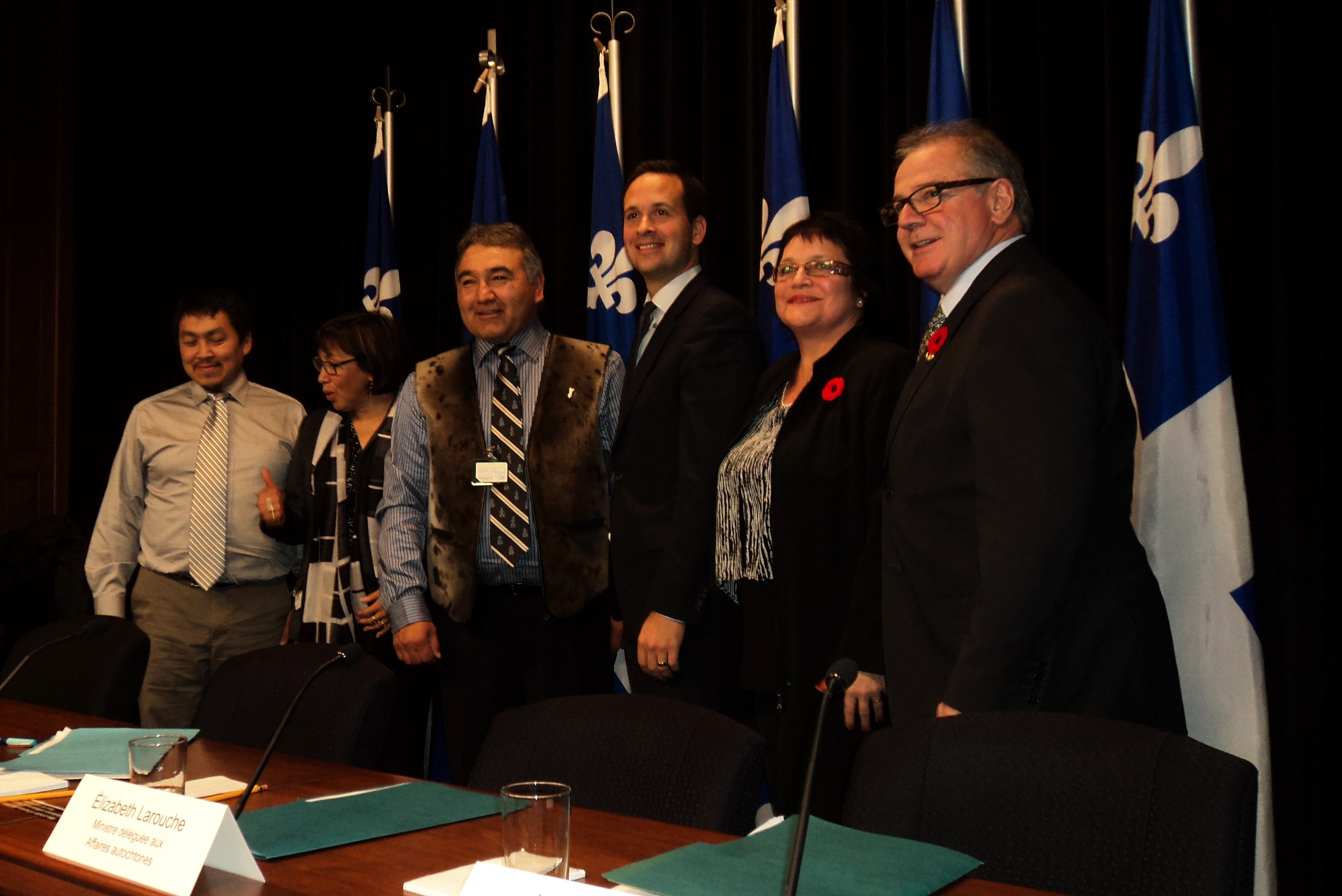 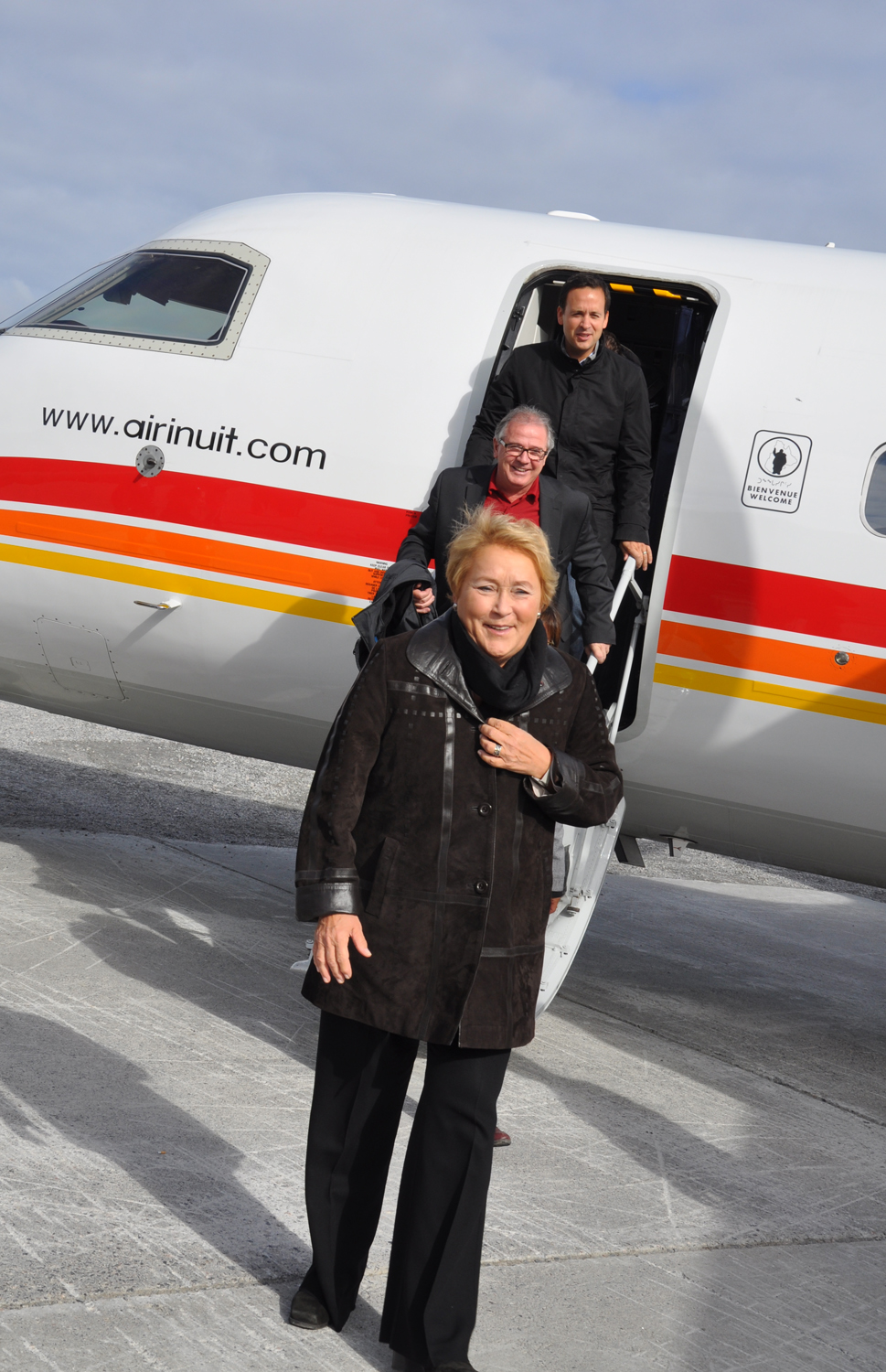 Quebec premier Pauline Marois steps off a plane in Kangiqsualujjuaq in September, followed by Ungava MNA Luc Ferland and Alexandre Cloutier, Quebec’s minister responsible for the Nord-du-Quebec region. The province is calling on the federal government to fulfill its treaty obligations and help Nunavik build the 899 units it needs to end its housing crisis. (PHOTO BY SARAH ROGERS)

Quebec’s Parti Québécois government joined forces with Makivik Corp. Oct. 30, calling on the federal government to pay for a catch-up program to build enough housing in Nunavik to end the region’s housing crisis.

“It is more than urgent that the federal government stop closing its eyes and assume its responsibilities, because the Inuit are living in unacceptable conditions,” said Alexandre Cloutier, Quebec’s minister responsible for the Nord-du-Quebec region, at a Quebec City press conference Oct. 30, accompanied by Makivik Corp. president Jobie Tukkiapik and Kuujjuaq mayor Tunu Napartuk.

“With $185 million, Nunavik’s housing shortage could be solved,” he said. “We’re asking that the Inuit receive what is owed to them.”

Quebec’s statement echoes recent calls from Makivik and NDP MP Romeo Saganash, who have criticized Ottawa for backing out of Canada’s obligations under the James Bay and Northern Quebec Agreement.

Makivik said that, by failing to fund the construction of housing over a six-year period in the 1990s, the federal government spurred a housing crisis that has today left 68 per cent of Nunavik’s population living in overcrowded housing.

Makivik says the region is short 899 units — a figure backed up by the 2013 housing needs survey released last May by the Kativik Municipal Housing Bureau.

After attempts to negotiate a housing catch-up agreement with the federal government broke down in 2011, Makivik triggered a dispute resolution mechanism and a mediator was named.

In a September 2012 report, mediator Dominique Borcheix found that Canada did not act in good faith during the renegotiation of a 2010-2015 housing agreement and encouraged both sides to return to the table.

“Not only has the federal government proven to have abandoned its responsibilities, but they’ve shown negligence and bad faith in their negotiations with the Inuit nation,” Cloutier said.

Makivik officials have met with the federal government since then, but said the current government “is not open to funding a catch-up program” and is looking to Inuit organizations to come up with innovative new models to address its housing needs.

For its part, the Quebec government has spent more than $79 million to build 300 units in Nunavik by 2016.

That money was introduced as part of the former Quebec Liberal government’s Plan Nord, a plan now rebranded by the current Parti Québécois government as Le Nord Pour Tous (The North For All.)

“Our government recognizes that housing is fundamental to a good quality of life; that’s why we renewed the Nunavik Housing Agreement for five more years in 2010, contributing $17 million annually for the construction of social housing units,” the statement said on Valcourt’s behalf.

“Additionally, our government provides more than $350 million in annual funding through the Canada Housing and Mortgage Corp., to the province of Quebec for new affordable housing,” the statement said.