Quebec minister under fire for comments about Nunavik parents 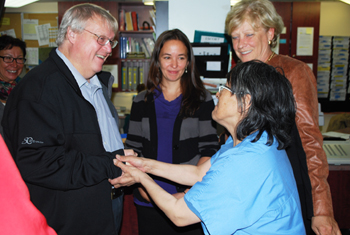 Quebec Health Minister Gaétan Barrette is pictured meeting with health care staff in Puvirnituq in 2015 during a visit to Nunavik. (FILE PHOTO)

The head of Nunavik’s Inuit birthright organization says a Quebec minister should resign after his remarks about Inuit parents’ ability to accompany their children on medevac flights.

Quebec’s health minister, Gaétan Barrette, was speaking to reporters at an event in Montreal on June 8 when he was asked about the government’s revised policy, which now allows parents to accompany their children being transported to hospitals on the province’s air ambulance, which serves Quebec’s northern and remote regions.

“If you follow that in the news, I can guarantee you that there will be one incident in the next six months where somebody will not be allowed on the plane,” Barrette said in an audio clip obtained by CBC News.

“Why? Because no one agitated, drunk, under whatever influence, would get on the plane … at any cost. That will not happen,” Barrette said in English. “That happens all the time.”

Last January, it came to light that the province did not allow parents to fly with their children, creating stress among young patients and the medical staff who care for them.

Following a public outcry, the government announced weeks later that it would change that policy to allow parents to travel with their children, though it does not appear to have been enforced.

The audio clip included in news reports does not reference a specific region, but the CBC said the minister had begun speaking about the Nunavik region just beforehand.

Makivik Corp. president Charlie Watt said that Barrette has already lost trust among Indigenous people in Quebec and should resign from his position.

“I’m not only shocked by the remarks but I think it’s also unbelievable,” Watt said.

For his part, Barrette apologized in a public statement June 21, adding that he “never intended to target [Indigenous] people” in the comments he made.

Barrette said he only sought to explain the general issues around medical evacuation by plane.

“I did mention that a parent or loved one who is agitated or under the influence of a toxic substance may not be permitted to accompany their child on board the air ambulance,” he said in his statement.

:This was simply an explanation of one of the security procedures governing the accompaniment policy, and was intended for all parents and all relatives, regardless of cultural background.”

Since March 2018, when the province committed to change its policy, the organization that manages the air ambulance, Évacuations aéromédicales du Québec, or ÉVAQ, said 75 children have been transported to southern hospitals on the Challenger jet facility. Eleven of them were from Nunavik.

Only one of those 75 children was accompanied by a parent, said an ÉVAQ spokesperson.