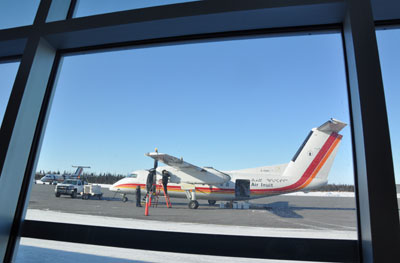 An Air Inuit Dash-8 is pictured parked outside of the Kuujjuaq airport. Quebec will host a regional air transport summit in 2018 to look at ways to make air travel in the province more accessible. (PHOTO BY SARAH ROGERS)

The Quebec government announced plans to host a summit on regional air transportation next year with the goal of making the province’s North more accessible.

The province says it wants to identify the best ways to improve Quebec’s air travel network, while lowering air fares to the province’s most isolated regions.

Regional consultations will take place from May through September, including a stop in Kuujjuaq at a yet-to-be announced date. Those consultations will set the stage for the main summit, scheduled for February 2018 near Quebec City.

“The extent of the territory, the isolation of communities, the lack of links between northern and southern Quebec and limited access to foreign markets are all factors that can limit the development of Quebec beyond the 49th parallel,” said Pierre Arcand, Quebec’s minister of Energy and Natural Resources, at an April 25 news conference.

Arcand is also the minister responsible for Plan Nord, the government’s action plan for development in Quebec’s North.

“For the communities in the Plan Nord territory, air transport represents significant economic and social challenges to which the summit will offer solutions.”

Arcand noted that most mining companies based in those regions must build their own airstrips and transport infrastructure. A better network could help attract more investment, he said, while benefiting the communities who rely on services and goods delivered by air.

Stakeholders are invited to register to take part in the regional meetings through the Quebec transport department’s French-language website here.